The last days of a long marriage 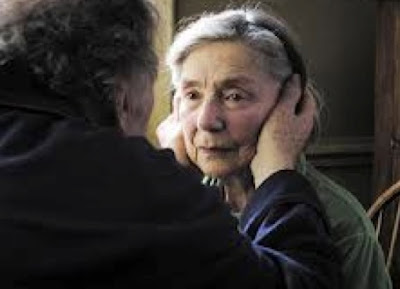 The living room is spacious enough to accommodate a grand piano. The walls are lined with books, CDs and LPs, relics of a sort. The stereo equipment looks as if it dates to the 1980s. Georges and Anne, both in their 80s, inhabit this Parisian apartment. They were classical musicians; she taught piano at a high enough level to help some of her students become concert artists.

You can tell by the lived-in look of things, that Georges and Anne have resided in this apartment for a long time. It's quiet, even isolated, filled with a sense of daily life that has settled into comfortable routine.

One night Georges and Anne return home from a concert to discover that their front door has been pried open. Nothing seems to be missing. Let's say that this is more than an attempted burglary; it's a foreboding.

The next day, while seated at the kitchen table and discussing how to get the door repaired, Anne suffers a stroke, the first sign of what will become a labored deterioration, a spreading paralysis that will lead her through various stages of disablement and ultimately to death.

If the story of Anne's final days weren't in the care of Austrian director Michael Haneke, Amour easily could have drifted into movie-of-the-week territory, a smorgasbord of melodrama and sentiment. But Haneke (The White Ribbon and Cache) is not given either to melodrama or sentiment, and he delivers Amour in long slow takes that demand that we consider what it's like to watch someone die. He offers no soothing interruptions. No flashbacks to happier times.

Although punctuated by visits from Georges and Anne's daughter (Isabelle Huppert), a few nurses and the apartment's helpful superintendent and his wife, Amour never feels like anything but a two-hander, a slow dance performed by two amazing actors, Jean-Louis Trintignant (familiar from A Man and A Woman) and Emmanuelle Riva (the girl in Hiroshima Mon Amour). These two icons of French cinema give two of the year's best performances. Riva's has been acknowledged with an Academy Award nomination; Amour has been nominated for best picture and best foreign-language film, and Haneke received a best director nod. And, yes, the overlooked Trintignant deserved an Oscar nomination, as well.

Awards considerations aside, Amour stands as a movie of compelling subtleties and careful refinements, a late-life study that never feels studied.

The solitude of the apartment which Georges and Anne occupy tells us of their slow removal from a more bustling life. One imagines days in which they entertained, dinners full of wine and lively conversation. We suppose that many of their friends are gone: During the movie, Georges leaves the apartment to attend a funeral, one of his few forays into the world beyond what seems to have become a retreat.

The drama centers on Anne's decline. After an unsuccessful surgery, she returns home knowing that her situation is hopeless. Georges assumes a caretaker role, shuffling about the apartment, tending to Anne's needs, being chastised by her when she catches him looking at her too long. Is he wondering whether she's OK? Trying to understand how she's adjusting to the inevitability of her fate? Contemplating life after she's gone? Forming a mental picture that will last?

It matters, I suppose, that Georges and Annes are cultured people. They've lived a life in the arts. They have made and appreciated beautiful music. They have read the latest books. They have kept up with events. Now -- like people in a waiting room -- they anticipate an arrival; they're waiting for Anne to die. Inside their apartment, time seems to have slowed and even expanded, the way it does when waiting becomes a preoccupation.

The title of the movie should not be overlooked. Amour certainly qualifies as a love story. The contours of the relationship between Georges and Anne are well-defined. We can imagine their lives before we meet them, and if you know these actors from their younger days, you sometimes may see traces of their former selves. As it must, what was has become what is.

So what happens? Georges must help Anne in the bathroom; he must help her exercise her withering body; he must watch as she loses control of her bodily functions; he must listen when she's reduced to forcing out bits of sentences that barely make sense. Haneke brings a near-reportorial eye to all of this. And Trintignant maintains a kind of gentle resolve as he tends to Anne.

Georges doesn't want to let Anne go. At the same time, he understands that she's suffering indignities that she finds intolerable. She's not fighting death; she's battling the degradation of illness.

Georges tells his daughter, who wonders whether Anne shouldn't be put into a home, that he will not allow it. He promised Anne he wouldn't let her die in an institution. For Georges and Anne, life no longer has much to do with outsiders, even their daughter.

At one point, Anne looks at the family photo albums, and decides that life has beauty. But Georges and Anne seek no refuge in the past; they're firmly fixed in the present -- and, for them, the present is challenging because they know that they're no longer in control of much of anything -- if, indeed, they ever were.

Georges and Anne have their own ways of reacting to the situation in which they find themselves. I think it's possible to tell, for example, what they might have argued about when they were younger and more vital.

Among other things, Amour is a portrait of a long marriage, a snapshot taken during love's final act. Sans a musical score, sans visual embellishment, Haneke contemplates life's end. For many that may sound like a daunting, discouraging and unsatisfying.

I found Amour to be none of those things, but saw it as a carefully distilled and pared down portrait of a marriage that involves us in the lives of Georges and Anne, as those lives are near their end.

Posted by Robert Denerstein at 3:15 PM

It is the way we relate to all our experiences: negative, positive and neutral such that our suffering is reduced and our well-being increased. Mindfulness focuses our attention on the present moment (not entangled in the past or future) and we are not judging or rejecting what is happening in the present. This kind of attention generates energy, clearheadedness and joy.marriage

wow- can't wait to see that. I remember Jean Louis Trntignant was wonderful in either Red or White?