Beautiful Creatures comes on like a Twilight wannabe, but turns into lushly photographed drivel. 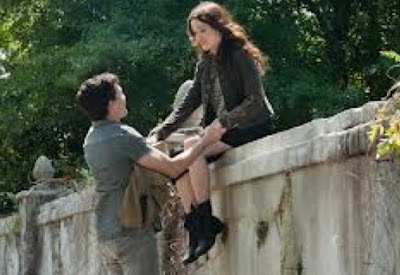 A small-town southern boy, he yearns to experience the world beyond the stultifying, church-dominated confines of Gatlin, South Carolina. New in town, she's more worldly than any of her high school peers. Oh, and by the way, she has supernatural powers that, at age 15, have yet to be harnessed.

Despite their differences, these two -- Ethan Wate and Lena Duchannes by name -- are kindred spirits. We know this because they both read books that the have been banned from the town's library. He's into Kurt Vonnegut. She carries a Charles Bukowski paperback with her, a signifier that underlines her status as an outsider with a capital "O."

Together, Ethan and Lena try for epic romance in Beautiful Creatures, an apparent Twilight wannabe that asks the now-familiar but still preposterous question: Can humans and fantasy beings find true and maybe even lasting love?

In this case, the fantasy beings aren't vampires; they're witches who prefer to be called "casters," as in spell casters. Ethan (Alden Ehrenreich) and Lena (Alice Englert) try to make a go of it, he with his curiosity, sensitivity and aw-shucks grin and she with a protective layer of teen superiority.

Ethan is easy-going. Lena, on the other hand, is not one with whom one wishes to trifle. When she's angry, she's liable to furrow her brow and create a psychic vibe that shatters every window in her high school classroom.

Lena's mysterious uncle, Macon Ravenswood (Jeremy Irons), has brought his niece to Gatlin to protect her from a family curse dating back to a Civil War battle.

For Lena, the stakes couldn't be higher. When she turns 16, she stands a chance of being claimed by the dark forces that claimed her mother Serafine (Emma Thompson) and her flirtatious cousin (Emma Rossum).
Yes, you read right. This lush bit of young adult blather features appearances by Irons and Thompson, both of whom sport southern accents. Irons brings out his inner aristocrat; Thompson seems to be enjoying herself as an arch and malicious "caster" who's able to inhabit the bodies of otherwise upstanding folks. Rossum, too, seems to have found a way to remain lively amid the story's Southern Gothic moodiness.

If the presence of Irons and Thompson weren't cause enough for concern about possible cinematic decline, the movie also makes room for the gifted Viola Davis, who plays Amma, the town librarian, a woman who has been looking after Ethan and his reclusive father since the boy's mother died.

To make matters worse, writer/director Richard LaGravenese (evidently intent on trying to provide a new big-screen fix for withdrawing Twilight addicts) seems to take his adaptation of Kami Garcia and Margaret Stohl's young-adult novel seriously. Cinematographer Philippe Rousselot follows suit with lots of lush imagery -- at least when the movie's functioning in its idea of the real world. The special effects associated with the world of casters prove considerably less captivating.

But back to our young lovers. Ehrenreich lays on as much charm as he can muster; Englert (the daughter of Australian filmmaker Jane Campion) sometimes seems to be channeling whatever sullenness Winona Ryder left behind when she exited her teen years, but softens enough to keep her character from curdling.

Ehrenreich and Englert do not make for the most memorable big-screen couple. Whether you consider it a low bar or not, they're no Robert Pattinson and Kristen Stewart, the last actors to try to find happiness as characters from different dimensions.

I suppose there are some pleasures here, though for me they were mostly inadvertent. Macon Ravenswood lives in a vine-covered derelict cliche of a mansion that's modern and spare on the inside. At one point, Davis' Amma brings food to the gravesite her late Uncle Abner and asks for guidance. LaGravenese even manages to work a Civil War re-enactment into the movie's inflated finale. All of this might have been more fun had LaGravenese spiked the entire concoction with more daffy spin.

I don't know if young adults will turn out for Beautiful Creatures. If they do, perhaps more of these books will find their way to the screen. As for me, I was happy as barbecue sauce on a well-cooked rib to say goodbye to Gatlin, where it seemed as if I had spent far too much time and found far too little reward.