Turn 21, drink until you drop

What? You expected more than a raunchiest from the guys who wrote The Hangover? 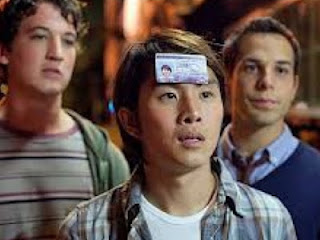 I was still in college on the day I turned 21. I remember walking into a bar near campus and finding a seat. I secretely hoped that the bartender would look at me suspiciously so that I could whip out my driver's license and demand the service to which my new maturity entitled me. Instead, I got a half-hearted request for an ID, followed by an even more indifferent, "What'll you have?"

So went my unceremonious entry into the world of legal drinking.

The new comedy 21 and Over revolves around the events accompanying one young man's 21st birthday. He's Jeff Chang (Justin Chon), and his friends always call him by both his first and his last names. On the eve of an interview for admission to medical school, Jeff Chang veers from the straight and narrow. The reason: He's visited by two long-time friends (Miles Teller and Skylar Astin) who insist on helping him celebrate his birthday.

They don't much care that Jeff Chang's demanding father (François Chau) is scheduled to pick up his son for the interview in the morning.

Now, you'd have to be entirely blotto not to realize what's about to happen. Jeff will engage in an epic bout of binge drinking that will bring him to a near comatose state while the comedy turns into the expected ruanchfest.

Written and directed by Jon Lucas and Scott Moore, the writers of The Hangover, 21 and Over continues a streak that thus far has been based on partying, substance and alcohol abuse, sexual humiliation and male nudity.

In some ways, 21 and Over simply drops the Hangover formula onto a college campus, a move that presents ample opportunity for bar-hopping, parties and co-ed ogling. Judging by this and other movies, no one who attends college in a comedy ever has seen the inside of a library. In fact, college looks like a libidinous playground for young people who face adult life as if it were a prison sentence.

But about that raunchfest. At one point, Jeff Chang stands on a bar and urinates on the gathered crowd. Projectile vomiting? Of course. And before the night is done, Jeff Chang will eat a tampon.

Maybe you consider those comic spoilers, but you probably should know just how raunchy some of the raunch gets.

Early on, Jeff Chang's two companions (who remain relatively sober) walk across campus nude, except for the white socks that cover their penises. The movie then proceeds to tell us how they got that way, a story that involves retribution for a sorority invasion.

Comedies such as 21 and Over stagger from one ribald set piece to the next, but have become so familiar that I couldn't work up much by way of disgust. Besides, Astin's character proves reasonably likable, and the movie isn't nearly as mean-spirited as it could have been.

Still, 21 and Over provided me with few laughs as I waited for the inevitable interjection of some supposedly redeeming drama.

As it turns out, the stressed and depressed Jeff Chang doesn't really want to be a doctor; the more reserved of the trio (Astin's character) loosens up when he meets a blonde co-ed (Susan Wright); and the wild man and instigator in the trio decides to turn over a new leaf, but not until the actor who plays him (Teller) gets to practice sounding a lot like Vince Vaughn.

In a way, reviewing movies such as 21 and Over is pointless. The audience for this kind of movie is not review driven, and, as the saying goes, people who like this sort of thing probably will like this particular thing. They may also tend to overuse the word "awesome."

21 and Over is one more comedy that satisfies adolescent cravings for moments of pseudo-transgression. So if it's your keg of beer, I'll leave you with one simple and heartfelt thought, "Party on, dude.


Posted by Robert Denerstein at 5:45 PM