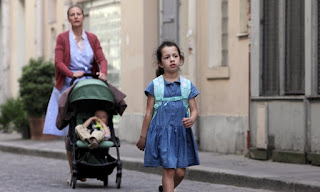 The situation couldn't be more familiar to most moviegoers. A successful couple -- she's a lawyer; he's in the music biz -- need to hire a nanny so that their lives aren't entirely consumed with child care. As played by Leila Bekhti and Antoine Reinartz, Myriam and Paul are straining to "have it all." They have two children, a young daughter and a toddler of a son. After a couple of unsuccessful interviews for nannies, the couple discovers Louise (Karin Viard). Louise relates beautifully to the children. Everything goes smoothly, but director Lucie Borleteau gradually introduces cracks in the newly established facade. As the movie unfolds, Louise's peculiarities become more and more pronounced. When a hallucinating Louise sees an octopus in her kitchen sink, we're pretty sure that she's gone round the bend and won't be coming back. Borleteau deserves credit for making Louise a complex figure, soothingly maternal, yet eerily possessive. Viard gives an unnerving performance, but the movie doesn't always show the parents behaving credibly. Worse yet, you can't call a movie The Perfect Nanny without tipping your hand. We know that perfection eventually will produce a bloody, horrific outcome in an attempt, I think, to shock and possibly to evoke criticism of middle-class parents trying to navigate multiple worlds.

And Then We Danced 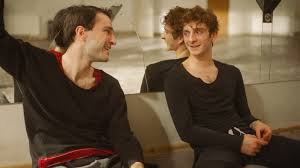 If the bourgeois trappings of The Perfect Nanny seem overly familiar, the milieu of And Then We Danced feels refreshingly novel. Director Levan Akin takes us to the Republic of Georgia, where we meet Merab (Levan Gelbakhiani), a young man who's trying to make it in the world of traditional Georgian dance. In And Then We Danced, the dance sequences take place mostly during rehearsals that emphasize a style based on rigor, precision, and arrestingly stark movements. Georgian dance, we quickly learn, is more than an art form; it's regarded as a near-sacred expression of national character. On its surface, And Then We Dance is a gay coming of age story. When a new dancer (Bachi Valishvili) turns up, Merab turns his attentions from his longtime dance partner Mary (Ana Javakishvili Initially, rivals the two men eventually consummate a sexual relationship in scenes that sparked waves of protest in Georgia. Set mostly in the city of Tbilisi, And Then We Danced benefits from its setting, from mesmerizing moments in which groups of characters sing and from the avidity of Gelbakhiani's performance which culminates with a dance in which Merab triumphantly combines traditional moves with his own improvisations. The story may not be earth-shaking, but dropped into a Georgian context, the movie compels.