Miss Juneteenth knows the world in which its mother/daughter story unfolds. 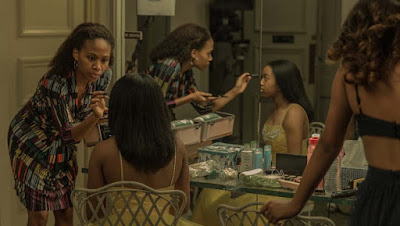 In these amped-up times of intensity and outrage, Miss Juneteenth can seem like a balm. Rooted in a predominantly black town near Forth Worth, Texas, director Channing Godfrey Peoples's debut movie provides narrow-gauged pleasures while focusing on a mother-daughter relationship.

Nicole Beharie plays Turquoise Jones, a woman who once held the title of the town's Miss Juneteenth. Juneteenth, you'll recall, is the holiday that acknowledges Texas's belated recognition that slavery had been abolished in 1965. It took Texas an additional two years to get around to catching up with Lincoln's proclamation.

Beharie's character suffers from a familiar problem. Turquoise is one of those unfortunate people whose major life experience happened when she was a teenager. She won the town's Miss Juneteenth crown and the scholarship that went along with it. But life intervened and Turquoise failed to take full advantage of the opportunity. She now works in the town's bar-and-barbecue joint. She's also pushing her teenage daughter to enter the current Miss Juneteenth contest and having an on-and-off relationship with her former husband (Kendrick Sampson).

The key to film involves Turquoise's relationship with her 15-year-old daughter Kai (Alexis Chikaeze). Kai has little interest in Miss Juneteenth and the culture that surrounds it. She prefers dancing to dramatic recitation and has no use for the primping that goes into a beauty pageant.

An obvious psychological dynamic presents itself: Turquoise wants her daughter to take advantage of the opportunity that she was unable to realize. But like most teenagers, Kai needs to stake out her own turf.

The men in Turquoise's life are her ex, a decent guy with a fondness for gambling, and Bacon (Akron Watson) the local funeral director who's carving out a secure economic future and who wants to share it with Turquoise, who's always facing economic pressures of one sort or another.

Turquoise, who tends to be an over-protective mother, also must deal with her church-going mother (Lori Hayes) who also happens to be an alcoholic.

Peoples' fondness for her characters becomes apparent as she allows the story to chart its generally predictable course.

That's not to say that the movie lacks substance: The movie's central mother/daughter relationship is well-drawn, as is Kai's relationship with her not entirely responsible father. And both Turquoise and Kai move toward hard-won moments of self-fulfillment with Beharie's performance as a woman who won't surrender all of her dreams leading the way.

Fair to call Miss Juneteenth a different kind of feel-good movie: one that knows the world it's depicting and the characters who live in it.