'Hamilton' for the multitudes. No waiting. 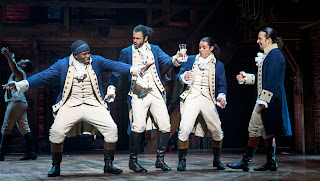 Reviewing Hamilton at this stage of the game  —  nearly five years after the show premiered on Broadway — is a bit like debating the virtues of the candidates in the presidential election of 1904. The verdict already has been reached. Theodore Roosevelt clobbered his Democratic opponent, Alton B. Parker. What you don't remember Alton B.?

Unlike poor Parker, Hamilton has not wanted for media attention. It has been reviewed with its original cast, with performers who have taken over for the originators and with companies that have staged touring productions. Now, Disney has made a filmed version of the original cast available for streaming.

As I said, the verdict on the show already has been reached: Lin-Manuel Miranda’s hip hop approach to American history brims with the exuberant energy of a story recast in a "revolutionary" way. Hamilton's mostly black and brown actors capture the cockiness, impudence, and energy of men seized by an intoxicating blend of ambition and vision; i.e., our so-called "Founding Fathers."

The version that’s being brought to the screen by Disney offers immediate advantages. You don't need to take out a bank loan to see it. You needn't get up at the crack of dawn to score a ticket or enter a lottery in hopes of being lucky enough to gain access to Hamilton-world.

You also get to savor the work of the original cast as it brings rap rhythms to dialogue that's delivered with snapping, rapid-fire elan. A key theme appears in a recurring line. "I'm not throwing away my shot,"  Hamilton repeatedly insists. The line underscores Hamilton's piercing ambition, echoing almost from the moment Hamilton arrives in New York City from the Caribbean until he falls in a duel to Aaron Burr.

The cast is fine: Leslie Odom Jr.’s Burr tries to elevate fence-straddling into a virtue.    Christopher Jackson’s George Washington projects the requisite authority, and a deviously entertaining Daveed Diggs makes Thomas Jefferson into a bit of a fop — if it’s possible to be foppish while rapping.

Don’t forget Jonathan Groff who turns King George III into some of the best comic relief ever to grace a musical stage, sometimes in close-ups that show the spittle that accompanies speech loud enough to resonate in the back rows of a theater.

And, of course, there’s Miranda’s audacious, energetic, and ever-striving Hamilton, who -- oddly, I think -- isn't always the most compelling presence on stage.

Directed by Thomas Kail, who also directed the Broadway production, Hamilton rightly can be seen as a gift to all of us for whom the Hamilton experience has been confined to reading the endless quantities of ink that have been spilled on the show’s behalf.

Now, having said all that, I need to tell you that Hamilton neither should be seen as a static filmed record of a play or a completely cinematic experience.

The decision to film before a live audience presented Kail and cinematographer Declan Quinn with serious challenges. Many cameras were used but keeping camera operators off the stage meant that Kail wasn’t always able to use the stage’s space in the most dyadic ways.

On the other hand,  the presence of an audience helps overcome any distance viewers may feel as Hamilton unfolds. From the show's opening moments, audience excitement spills off the screen. The movie is two hours and 41 minutes long with a brief intermission. It should be watched straight through.

More apparent in the movie’s opening act, the film's limitations tend to fade as the stage becomes less crowded in the play’s post-revolutionary second half. In one of the show's best bits, Kail captures the biting energy of a rap duel between political foes Jefferson, champion of agrarian virtue, and Hamilton, lover of cities with their rude, bumptious energies.

Miranda was inspired to write Hamilton after reading Ron Chernow’s 2004 biography, Alexander Hamilton.  In Miranda's hands,  Hamilton provides an occasion to reflect on the importance of who’s telling a historical story and how a bold new choice in that area can expand and enrich the conversation. Moreover, the play contains enough references to the racial injustices of slavery to bring it into alignment with the current moment.

Still, I'd like to offer a small addendum. I hope that a gifted director someday totally reimagines  Hamilton for the screen, keeping Miranda’s book and music intact, of course. It might not work, but then again it might just be a glorious thing to behold.