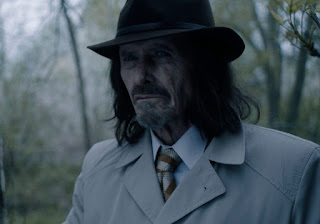 It's difficult to watch Dreamland, a wild movie from director Bruce McDonald, without acknowledging that McDonald has both visual chops and a finely tuned eye for absurdity. But McDonald's strange helping of film noir -- set mostly in Luxembourg -- never acquires enough coherence to take the spotlight off the movie's unashamed weirdness. In a dual role, Stephen McHattie plays a taciturn hitman who looks as if he's just awoken from a three-day bender. McHattie also plays a jazz trumpet player, who's addicted to heroin and who sounds a lot like Chet Baker when he finally gets around to playing. Although he has no trouble killing his targets, McHattie's hitman balks when he's roped into a scheme to sell underage girls to various lecherous customers. A gangster named Hercules (Henry Rollins) runs the sordid enterprise that our tarnished hero ultimately tries to topple. Meanwhile, a woman known only as the countess (Juliette Lewis at her most flamboyant) has arranged to buy one of Hercules's girls as a bride for a brother (Tomas Lemarquis), who happens to be a vampire. Calling your movie Dreamland only gets you so far off the hook when it comes to transcending the movie’s collection of bizarre arias and getting to something deeper. The sex trafficking at the film's core remains twisted and we're left to admire the various outre flourishes that emerge from McDonald's vivid imagination. These include a group of kiddie assassins, plenty of Eurotrash atmosphere, and a violent finale that looks as if it might have been inspired by a Hong Kong thriller made during the 1980s. McHattie has the kind of growling delivery that may remind you of the late Harry Dean Stanton; he's certainly game to lend his talents to whatever it is that McDonald is trying to accomplish. But McHattie, who also starred in McDonald's horror film, Pontypool, doesn't provide enough of a reason to dream along with McDonald in this intermittently amusing and self-consciously bizarre walk on the wild side. 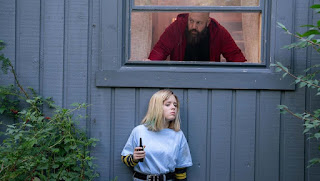 The big attraction in Becky, a thriller built around a killer who invades the home of a widower who's introducing his embittered daughter to his new fiancee, involves casting. Kevin James -- yes, he of Mall Cop -- plays Dominick, a neo-Nazi prison escapee who has enlisted some of his prison cronies in a scheme to recover the ill-gotten fruits of some long-ago crime. James opts for understated sadism presented in the guise of a man who simply wants to recover his money and move on. Perhaps Dominick would have succeeded if it hadn't been for 14-year-old Becky (Lulu Wilson), a teenager who eventually matches wits and grit with him. Directors Cary Murnion and Jonathan Milott devise many wincing ways for characters to be tormented as a predictable story unfolds. Early on, Becky threatens to deal with emotional difficulties faced by a teenager who lost her mother to cancer. Dad plans to remarry and Becky isn't happy when she meets her father's fiancee (Amanda Brugel), a woman who more or less becomes a bystander in the movie’s plot. Void of much by way of psychological subtext, Becky amounts to another big-screen gorefest, this one built around a teenager who musters up ridiculous amounts of kick-ass girl power.