Beyonce rules in 'Black is King' 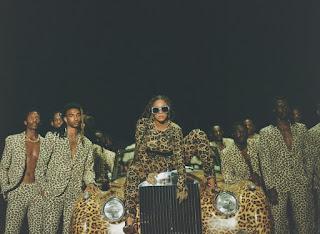 On Monday, Aug. 3, The New York Times devoted a page and a half to a six-critic discussion to Black is King, now showing on Disney+. That's a ton of space, considering that Black is King is a themed series of videos featuring songs from Beyonce’s album, The Lion King: The  Gift.
Too much? Maybe but Beyonce is … well … Beyonce.
She doesn’t think small. Her fans expect to be wowed, and Black is King doesn't let them down.
I’m probably not the best person to review Black is King. I haven’t seen all of Beyonce’s previous videos and I’m far from an expert on her music.
But Beyonce, who directed Black is King with help from a variety of directors, creates a spectacle-filled work that exists in a realm hovering between music video, performance art, dance, and costume extravaganza.
It’s also stuffed with themes. Among them: Black nobility and regard for ancestors, long gone kings who have become the stars that punctuate the African night sky. Then there's the oppositional pull of good and evil — not to mention the celebratory exuberance of the dancers who appear throughout.
Having said all that I’m sure I missed much.
A 90-minute sprint, Black is King doesn’t dwell on anything as Beyonce includes the work of artists from Nigeria and Ghana, among other countries.
Beyonce creates an Africa of life rituals, dance, and affirming mythology that swings wide enough to incorporate the story of Moses in the bullrushes and a Busby Berkeley style pool number. She ties the whole visual extravaganza to the story frame of The Lion King.
But Beyonce’s Afro-centric approach seems to have more in common with Black Panther than with Lion King which featured Beyonce as the voice of Nala in last year’s live-action remake. Both are pop-cultural odes to ideas about the underlying depths of Black culture.
I'm sure Beyonce fans will find nuances and references that eluded me, particularly as the movie fires image after amazing image.
Blink and you’ll miss appearances by Pharrell Williams, Naomi Campbell, and Lupita Nyong'o. You’ll have an easier time spotting Jay-Z who makes an extended appearance during the lavishly overstated opulence of Mood for Eva.
It's possible, I think, to view Black is King as an affirming fantasy of inner nobility or you simply can marvel at the parade of costumes and images, many of which reflect unabashed wit.
But Whatever Black is King says to you, once you begin watching, it's not easy to look away.

Email ThisBlogThis!Share to TwitterShare to FacebookShare to Pinterest
Labels: Beyonce, Black is King, The Lion King: The Gift