'Get Duked!' mixes horror and satire 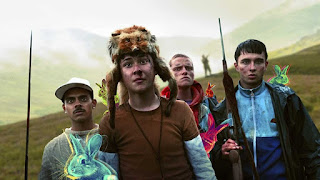 In Get Duked!, three teen misfits and an otherwise friendless kid join forces for what's intended as a character-building task: They're left in the Scottish highlands with a map and told to find their way out.
Part comedy and part horror film, Get Duked! becomes an intermittently successful take on class divisions and the many genre movies in which teens face lethal threats.

Not surprisingly, the movie's hapless bros (Rian Gordon, Lewis Gribben, and Viraj Juneja) are unimpressed by the prospect of winning the Duke of Edinburgh Award for their efforts in the wild.
Earnest by nature, Ian (Samuel Bottomley) takes things more seriously; he's been sent on the trip by parents who hope to break through his introversion.
Perhaps the hallucinatory power of ingested rabbit droppings will help? (No, I didn't make that up.)
Jonathan Aris portrays the supervising adult, a man who quickly disappears, leaving the boys on their own.
Eddie Izzard plays the Duke, an aristocrat on the prowl.  The Duke and his wife (Georgie Glen) fashion themselves as champions of a twisted agenda: They hunt and kill boys as part of a "culling" exercise that's meant to keep what's left of society from going further to the dogs.
All of this takes place against a backdrop of ludicrous larceny: The local cops hunt for a bread thief who ... as the name connotes ... steals bread.
Director Ninian Doff makes no attempt to disguise the shameless silliness of his movie, which falls short of scalding satire but offers a fair measure of chuckles.
Posted by Robert Denerstein at 1:10 PM