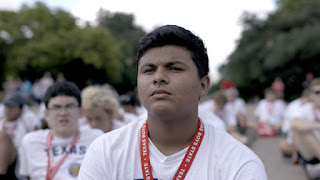 In 1935, The American Legion founded Boys State as a program designed to teach high schoolers about the glories of democracy.
Since then many youthful strivers have turned up in the program — notably Cory Booker, Dick Cheney, and Bill Clinton. All three are mentioned in the prologue to Boys State, a documentary from directors Jesse Moss and Amanda McBaine.
The directors also could have included Lou Dobbs, Tom Cotton, and, less obviously, the late James Gandolfini.
As I remember from high school, Boys State was an activity that some young men thought might enhance their profiles on college applications. If the movie has it right, Boys State has become a hotbed of partisanship, ambition, and staunch calculation.
Moss and McBaine focus their documentary on the 2017 Texas edition, which took place in Austin and which focuses on a variety of young men who are attempting to stand-out from 1,000 other attendees at an event that arbitrarily divides boys into two parties: Nationalists and Federalists.
The boys must then develop party platforms and elect a variety of officials. The whole raucous business culminates in the election of the governor of Boys State, a position fraught with irony: After the conclusion of a week-long event, there's nothing to govern.
You may find yourself watching Boys States through shifting veils of cynicism and hope -- with cynicism, I'm afraid, gaining the upper hand.  I say this despite the fact that one of the young candidates for governor  — Steven Garza — seems sincere, idealistic, and reasonable.
Before the ultimate gubernatorial showdown, we meet a variety of other boys who become key characters in the Boys State story. Rene Otero moved to Texas from Chicago. He wins election as party chair of the Nationalists, who soon spawn a move to impeach him.
Ben Feinstein, who lost both his legs to bacterial meningitis, becomes party chair of the Federalists. A pragmatist, Feinstein focuses on winning as a justification for the use of campaign tactics that some view as ethically challenged.
We also meet Robert McDougall, a kid who aspires to attend West Point and who seems to have absorbed a lesson many politicians learn. Pro-choice by conviction, McDougall finds himself bobbing in a sea of pro-life zealots.
What to do? He changes the views he expresses in public.
Garza winds up running against Eddy Proietti Conti, a young man who’s decidedly more mainstream in his outlook.  Garza isn’t helped by the fact that school shootings have made him an advocate for reasonable gun controls.
Most of the young men we meet are obvious candidates for Second Amendment sainthood. Some even cheer for Texas's secession from the Union.
It’s difficult to watch Boys State without being appalled by the ways in which some of these young men have normalized what’s worst about American politics.
I also wondered whether what I was watching was typical of Boys State or only of its most ambitious attendees. And there are suggestions that some of the boys can be different when they're not being subjected to the pressures of the teen herd.
The great hope, I think, is that most of those in attendance aren't as avid as those on whom the directors focus.
At least, I hope they're not.