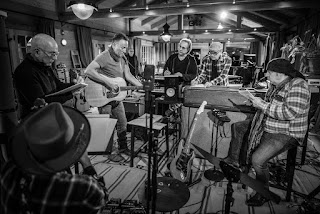 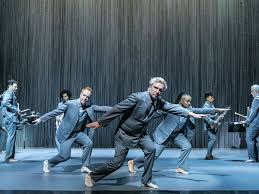 Bruce Springsteen is 71; David Byrne is 68. I guess you could say they qualify as elders in the world of rock.
I mention this because I happened to see Bruce Springsteen’s Letter to You and David Byrne’s American Utopia in the same week. The two films couldn’t be more different but both put us in touch with musical personalities who speak to our current moment and, just as important, to their current moments.

For the record, I’m not a music critic but I felt privileged to compare the two films — both worth seeing.

At 71, Springsteen has become more reflective. Deprived of youth, Springsteen's face has grown stern. He’s keenly aware of his 45-year association with E Street Band and he talks freely and generously about what’s on his mind, what’s behind many of the songs on his newly released Letter to You album.

Shot in black-and-white, Letter takes place in Springsteen’s recording studio in New Jersey over the course of several snowy days, and is, in that sense, insular -- an in-gathering of rock veterans who Springsteen calls his friends.

Byrne on the other hand can be seen in a stage production complete with choreography and brimming with Byrne’s devotion to polyrhythmic beats that are as complex as they are difficult to resists.

For the most part, director Spike Lee sticks to the stage production that played on Broadway before the COVID shutdown. A few glimpses of the audience and an end-of-picture sequence outside the theater seem irrelevant. Everything's already been said.

The show includes music from Byrne’s Talking Heads career but is performed with a new band that perhaps signifies the passing of the Talking Heads torch to a new generation.

And in its way, the film is as good as Jonathan Demme's Stop Making Sense, although slightly less revelatory because at the time of Demme's movie (1984) nothing quite like it had been seen -- a concert film with an artist's sensibility.

Springsteen’s movie, directed by Thom Zimny, marks the first full E Street Band recording session since Born in the USA (1984). In some ways, the film reminded me of Springsteen on Broadway, the  show in which Springsteen appeared mostly alone, singing and talking about his life.

Here he sings and talks, as well. Sometimes the revelations are personal (what it meant to attend funerals as a kid) and sometimes they’re about Springsteen’s rock evolution, beginning with his work the first band to which he belonged, The Castiles.

It’s possible to listen to the songs from both American Utopia and Letter to You without watching either film, but in the case of Utopia, the stage performance seems inseparable from the music.

Where Byrne can be a deadpan funny lyricist, wry observer,  and performance artist, Springsteen is more straightforward, more eager to plumb the emotional depths of his 71 years on the planet.

I won’t list the songs in each movie but a few from Letters to You — The Power of Prayer, One Minute You’re Here and Ghosts — suggest the poetry of Springsteen's  meditations.

In many ways, Letter stands as an homage to the past without being shackled to it. And at 71, Springsteen has his eye on the end of the road.

Springsteen’s approach — specific and still loyal to its Jersey roots — contrasts with the exuberance of Byrne’s geographical reach. His musicians come from Brazil, Canada, the US, and the ensemble is joyously multi-racial.

Utopia also has a contemporary urgency. With Janelle Monae's permission, Byrne offers his version of Hell You Talmbout, Monae's 2015 song acknowledging the many black folks who have died senselessly — from Eric Garner to Trayvon Martin to Emmitt Till.

What stayed with me about Letter is Springsteen's commitment to the salvific potential of rock ’n’ roll and he leads the E Street Band in hard-driving tunes that barrel at you like a freight train that can't wait to pull into heaven.

Byrne blends funk into a world he creates with  musicians working barefoot in grey suits. He explains how one tune — I Zimbra —uses lyrics by German Dada poet Hugo Ball.

Both films can be said to be about wokeness  -- in the best  sense of this invented word-- wokeness to the world (Bynre) or wokeness to interior life (Springsteen).

Springsteen wants us to awaken to passing time but to not rush forward so fast that we forget to pay homage to those who have gone before and, equally important, to understand that at some point, we must join them.

Byrne, who also talks about how some of the songs evolved, stands for a different kind of awakening, an enlivening of the spirit, an invitation to listen to voices from other worlds, beats that beckon us into unfamiliar terrain.

But make no mistake, both artists are deeply connected to their music and if you had to find a message to which both might subscribe, it could be a simpler one than anything I've suggested, something along the lines of “Get off your asses and dance.”*

Letter to You is playing on Apple TV+; David Byrne's American Utopia can be seen on HBO Max