How a great movie was written 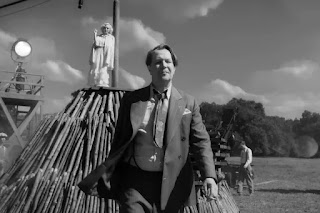 In 1940, screenwriter Herman Mankiewicz found himself sequestered in Victorville, California. He’d been sent to a remote ranch by Orson Welles to write the screenplay that turned out to be Citizen Kane.
Director David Fincher has taken on the task of telling Mankiewicz’s story, a look at a caustically cynical wit who could be amused by Hollywood's emptiness while still knowing how to navigate its treacheries.
Beautifully filmed in black-and-white by cinematographer Erik Messerschmidt, Mank peers into the corrupted soul of  Hollywood of the early 1940s, a time when the movie industry tried to establish its right-wing bona fides in California even as Hitler rose to power across the Atlantic and the country had yet to recover from the Great Depression.

Built around an intriguing performance by Gary Oldman as Mankiewicz, the movie sometimes feels like a breezy collection of bold-faced names from yesteryear -- from Ben Hecht to George S. Kaufman to S.J. Perelman.

The story eventually draws its energy from tension resulting from Mankiewicz's real-life inspiration for the character of John Foster Kane, none other than media titan William Randolph Hearst, played with surprising subtlety by Charles Dance.

Mankiewicz knew Hearst and was a frequent guest at Hearst’s San Simeon retreat, a lavish pleasure palace where Hearst entertained friends and where he and his mistress, Marion Davies (a terrific Amanda Seyfried), dwelled in isolated splendor. Hearst seldom found himself in agreement with Mankiewicz but thought him amusing.

Working from a script by his late father Jack Fincher, the director includes plenty of famous Mankiewicz bon mots.  After a display of drunken vomiting at a dinner party,  Mankiewicz supposedly excused himself by saying that at least the white wine had come up with the fish. Not quite enough for redemption, but bad, either.

A quick Google search will show that Mankiewicz looked nothing like Oldman, which may distract aficionados or provide further proof of Oldman’s versatility. Credit Oldman with fashioning a character who tried to balance a need for success and money with an underlying desire to ridicule and dismiss the powerful barons who held the purse strings.

Mank will be of particular interest to those familiar with the controversy about who deserves credit for writing Citizen Kane. Officially, Welles and Mankiewicz shared credit, as well as an Academy Award for best screenplay.

But in 1971, New Yorker film critic Pauline Kael wrote  a provocative two-part story that awarded the lion’s share of credit to Mankiewicz. Kael’s conclusions have been disputed by others and I have no interest in stepping into waters that have been roiled by deep research and critical partisanship.

If you care, the movie seems to favor the idea that joint credit for the Kane screenplay was undeserved.

Notice needs to be taken of the many supporting roles that enliven Mank: Arliss Howard turns up as a doltish Louis B. Mayer, head of MGM; Toby Leonard Moore portrays David O. Selznick, and Ferdinand Kingsley offers his version of Irving Thalberg.

If you don't know who any of these folks are, Mank may require you to spend some time with Google, which means it's a bit of a film buff's night out.

What about Welles, you ask? He’s played by Tom Burke, but you won’t see much of him until near the movie’s end when Welles and Mankiewicz fight about who’ll receive credit for the Kane screenplay, which everyone acknowledges to be brilliant.

Others in the cast deserve at least cursory mention.  Lily Collins portrays Rita Alexander, the British secretary  hired to type the pages Mankiewicz — bed-ridden with a broken leg — dictated. Tuppence Middleton plays Sara Mankiewicz, the writer’s wife, a woman who abided Mank's alcoholism, gambling, and womanizing. Tom Pelphrey appears as Herman’s bother, Joseph — who went on to write and direct any number of memorable movies himself, All About Eve among them.

Sam Troughton takes a turn as producer John Houseman, who Welles occasionally dispatched to Victorville to check on Mankiewicz’s progress and to monitor his drinking.

Perhaps inspired by Kane’s complex structure, Fincher moves his story out of Mankiewicz’s Victorville retreat by flashing back to better and worse times. He highlights Mankiewicz’s relationship with Marion Davies, supposedly the model for the woman Charles Foster Kane embarrassingly attempted to turn into an opera diva in Citizen Kane.

I’m not sure if Fincher was trying to give the movie topical zing but he spends a fair amount of time on the California 1934 gubernatorial race in which Hollywood's upper echelon rallied to defeat author Upton Sinclair,  the Democratic candidate who was smeared as anti-American and a communist.

The screenplay suggests that the race may have marked the  beginning of manufacturing news to seduce a gullible public.

By making a movie about the making of a movie, Fincher has taken on a gargantuan task  — not to mention that he's dealing with what might be the greatest American movie of them all. Don’t fret. Kane is a far better movie than the movie about Kane and Fincher's effort occasionally goes slack.

Citizen Kane remains a great movie even if you know nothing about Hearst or any of the other so-called models for its  characters. Kane may have been of its moment, but it's too damn good to stay there.

Still, don't sell  Mank short. Fincher takes us back to a time when smart, literary types invaded Hollywood, collected some big paydays, and, in some cases, wrote fine movies. I'm not sure whether to view it as a footnote to a masterwork or an entertainment in its own right, but Fincher's Mank proves a dense, gossipy pleasure.