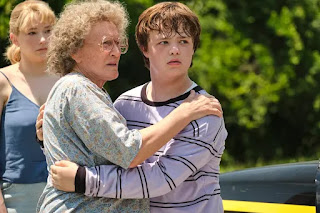 What could be more uplifting? A young man overcomes poverty and a host of family issues that include his mother’s self-destructive bouts with addiction. Despite what seem like insurmountable obstacles,  this young man manages to attend college and obtain a law degree from Yale. He ascends,  yes, but he never forgets his Kentucky and Ohio background. Warts and all, he honors his family.
That's the gist of director Ron Howard's Hillbilly Elegy, an adaptation of J.D. Vance's memoir about growing up among "hill" people who never quite shake their Appalachian roots.
Howard's  "elegy" distinguishes itself with two strong performances. An unrecognizable Glenn Close plays the family's grandmother, Mamaw. Mamaw embodies the movie's survivalist virtues. Her husband was an alcoholic and her daughter Beth (Amy Adams) has destroyed her life with drugs while floating through bad relationships and lost jobs.
But Mamaw refuses to let Beth's son, J.D., throw his life away. She knows pain and suffering but she's as hard as an aging artery and Close turns her into an unapologetic battler.
When everything else seems to be failing, Mamaw takes over. The wayward J.D. (played as a kid by Owen Asztalos), moves in with Mamaw. She lays down the law, a mighty act of will.
For her part, Adams gives Beth the volatility that accompanies a life that's constantly spinning out of control. Beth's efforts at conducting something resembling normal life waver between comical and pathetic.
The movie shifts time periods, flashing back to the 1990s from the first decade of the 21st Century,  a stop-and-start again structure that can make the story feel longer than its one hour and 56 minutes.
By the time J.D. heads to law school, he's being played by Gabriel Basso.  He also has an encouraging girlfriend, an East-Indian/American portrayed by Frieda Pinto.
On the verge of capitalizing on his law-school bona fides, J.D. is summoned home by his sister (Haley Bennett) because Mom has overdosed. Bennett's character, who married and remained in Middletown, Ohio, has exhausted her capacity to deal with a mother who seems irredeemable.
Far from perfect, Hillbilly Elegy, with a screenplay by Vanessa Taylor, calibrates Vance's story for multiplex audiences ready to devour a family tale that gives a full-throated endorsement to tough love, the kind that allows Mamaw to save young J.D.
The storytelling can be uneven, but to ignore Hillbilly Elegy would mean missing a chance to watch Close build a character from the hard, gravelly soil of deprivation and to experience Adams as a mercurial woman who lights fires that threaten to torch everything her character touches.
Posted by Robert Denerstein at 3:10 PM