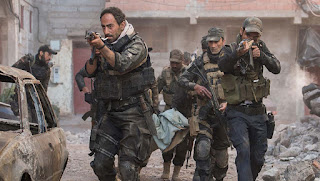 Mosul, an Iraq-based story that charts the activities of a squad of renegade warriors, takes us into familiar war-time movie turf: Buildings demolished by explosions, civilian lives destroyed, and homeless children wandering bombed-out streets. I don't mean to be callous but it's important to note that director Matthew Michael Carnahan isn't exactly breaking new cinematic ground. Mosul is more of an addition to the canon of intense war movies in the spirit of Ridley Scott's Black Hawk Down. At the same time, it should also be said that Mosul commands attention because of its fresh perspective; the movie tells its story from the viewpoint of Iraqis whose lives have been shattered by war. Set in 2017 and based on a New Yorker article, Mosel pits  a group of rogue fighters against the by-then staggering fighters of Isis. The group's leader (a convincingly tough Suhail Dabbach) has concocted a mission whose purpose doesn’t become clear until the final going. Early on, the team is joined by a young Kurd (Adam Bessa) who gradually blends into the squad, known as the Nineveh SWAT team. Shot entirely in Arabic, it's not always easy to tell who the SWAT team is fighting. But that may be the point: Order has so broken down that it's not always possible to discern who is a friend and who, foe. By the end, you'll know why the men have persisted in their self-defined mission, a touch that seems intended to justify their hardness.  An atmosphere of chaos precludes deep character development. Still, there's something to be said for a movie that tries to shed an American perspective. The fighters in Mosul aren't battling to preserve freedom or for any other abstraction: They're fighting in hopes that they can keep their loved ones alive. 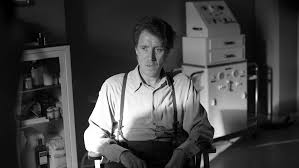 Last Call
When I was young, I regarded Dylan Thomas as the greatest of all poets. But time marched on and took my taste in poetry along with it.  Thomas, though still a worthy poet, appealed to me because he lived hard and died young, a romantic notion to which only the young are naive enough to subscribe. Last Call, a movie from director Steven Bernstein, both feeds and debunks the Thomas myth. Shot in black-and-white with interludes of color, the movie centers on the performance of Rhys Ifans as Thomas, a dissolute artist who spends much of his time in the US in the White Horse bar in Greenwich Village. He also ventures onto college campuses,  reading his poetry (declaiming might be a better word) to adoring college girls. Bernstein adopts what might be called a "poetic" approach to the material. We see Thomas's hallucinations as he spends his day drinking 18 double scotches in the White Horse, giving each drink a name. Enthusiasm marks an early drink, for example. We also see various figures from Thomas's life, notably his severely neglected wife (Romola Garai), the man arranging his tour (Tony Hale), and the doctor (John Malkovich) who understands that Thomas has entered a death spiral. More significantly, Rodrigo Santoro plays the bartender who pours Thomas's scotch and occasionally jabs at the great man's leaky ego. Although the movie runs for about an hour and 48 minutes, it can feel longer because it's like spending a day in a bar. Inebriation proves a mixed drink flavored with charm, intellect, wit, and cruelty. Ifans sometimes seems to be mumbling — albeit quite intelligently. Malkovich adds a serving of wry cynicism, bringing his trademark enunciation to the proceedings. Still, hanging out with drinks -- even those who achieved legendary status -- seldom proves enlightening.