A movie about men and their crazy ideas 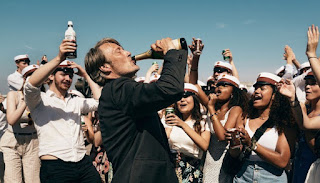 If Another Round, the latest film from director Thomas Vinterberg, is any indication, Denmark might be badly in need of a national 12-step program.  As the title suggests, Another Round takes on the subject of excessive drinking, tying it to the sagging ego of its main character, a high school teacher convincingly played by Mads Mikkelsen.
Mikkelsen portrays Martin, a middle-aged man who seems to have lost his Mojo. He's become an indifferent teacher and husband. His wife (Maria Bonnevie) works nights and he doesn't pay a lot of attention to his teenage children.
The story kicks in when Martin attends the 40th birthday celebration of a colleague (Magnus Millang). As the evening’s designated driver, Martin initially resists taking a drink but finally decides to join the party.
Not long after this celebratory night, Martin has an idea. Citing a Norwegian psychologist, he suggests that he and his pals test a hypothesis that claims they all need to raise their alcohol content by .5 points. The four men agree. Suddenly, they begin to snap out of their doldrums. Martin once again reaches his students and his cronies seem to be faring equally well.
It takes no crystal ball to predict where all this alcohol consumption will take the men, especially when they decide to push things to dangerous heights. Physical ed teacher Tommy (Thomas Bo Larsen) fares worst and Vinterberg doesn't shy from questions about addiction.
But what keeps Another Round from becoming another cautionary tale about excessive consumption is its recognition that men living deadened lives are willing to risk everything to feel the soaring intensity of being fully alive, of breaking from the routine that seems to have numbed them all.
Sure, these guys should have known better than to fool with a substance that has life-wrecking potential but Vinterberg isn't one to wag a finger in the faces of characters who’ve chosen obviously ruinous paths. Together with Mikkelsen, he makes the movie’s theme clear: Martin becomes a case study in what can happen to men when all sense of promise drains from their lives.
Posted by Robert Denerstein at 4:10 PM

Email ThisBlogThis!Share to TwitterShare to FacebookShare to Pinterest
Labels: Another Round, Mads Mikkelsen, Thomas Vinterberg