A portrait of '60s madness in the Soviet Union 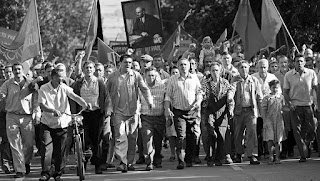 Director Andrei Konchalovsky's Dear Comrades! takes its cue from an event that may be unfamiliar to most American audiences. In 1962,  26 striking workers in the city of Novocherkassk were killed by Soviet Soldiers. The workers were upset that they were facing lower wages at a time when prices were rising and goods were scarce.
The story of what happened in Novocherkassk didn't emerge until the 1990s but Konchalovsky uses it to explore the complex political and personal currents that swirled in the Soviet Union during the 1960s.
Much of the movie centers on Lyudmila  (Julia Vysotskaya), a woman who pines for the days of Stalin when workers supposedly fared better. She's disappointed by Nikita Khrushchev's leadership.
A devout party member, Lyudmila opposes the protests that triggered military action. When her daughter (Yuliya Burova) joins the protestors, Lyudmila finds her political and personal loyalties put to the test.
Shot in black and white, Dear Comrades! features the artfully composed cinematography of Andrey Naydenov. Don't expect Dear Comrades! to leap from from one beautiful image to the next. But the movie's  images have depth and resonance, even when Konchalovsky takes us inside meetings where bureaucrats debate.
Vysotskaya commands the screen as a woman whose staunch convictions have provided her with various privileges. In an early scene, the cuts a food line to obtain the best available rations.
Konchalovsky gives fly-on-the-wall immediacy to a story that reveals the hypocrisies and betrayals of Soviet life ignited by the strike. Strikes weren't supposed to happen in a purported workers' paradise.
The movie doesn't shrink from the violence brought against the workers, mayhem that resulted in a cover-up in which just about everyone tried to evade responsibility.
During the picture's final act, a frantic Lyudmila and a sympathetic KGB officer try to locate Lyudmila's daughter who has gone missing and who may have been killed.
For a boldly realistic movie, the ending that Konchalovsky gives his story seems a bit of a cheat. Perhaps he wanted to light the lamp of hope.
But that doesn't negate the rest of Konchalovsky's achievement: He shows us what happens to people when their world seems to be collapsing. Not unexpectedly,  what we see is far from pretty.
Posted by Robert Denerstein at 8:10 PM