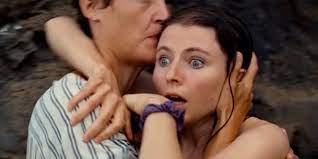 Imagine if you aged 50 years in a single day.
Or -- on second thought -- don't bother because if you buy into M. Night Shyamalan's Old, you'll be taking a trip that's often more ludicrous than scary, mind-expanding or (heaven forbid) insightful.
The movie begins when a family arrives at a tropical paradise, an upscale resort with a genial manager and all the amenities anyone could want.
Mom (Vicky Krieps) found the place online. Her husband (Gael Garcia Bernal) seems wary, but the two children -- a six-year-old son and an 11-year-old daughter -- are primed for fun in the sun.
Well, sort of. We quickly learn that Mom and Dad are keeping a secret about Mom’s health from the kids.
On the morning after their arrival, the hotel's manager (Gustaf Hammarsten) suggests the family visit a beautiful beach, a secluded spot he recommends only to special guests.
The vacationers are driven to the beach along with another couple and their daughter. Before long, a couple of additional beachgoers arrive, rounding out a cast that includes Rufus Sewell, Ken Leung, Nikki Amuka-Bird, and Aaron Pierre.
Once at the beach, the characters begin a mysterious aging process that baffles and unnerves them. Don’t blame lack of sunblock.
Those who try to escape immediately black out only to reawaken on the beach, trapped again in a rapid-aging nightmare by a steep cliff wall that makes the beach mostly inaccessible.
Shyamalan employs make-up and adds new cast members to create the aging process, which includes episodes in which Sewell's character,  a surgeon, steadily loses his grip.  A girl becomes pregnant after starting the movie as a pre-schooler. The bones of a vain woman (Abbey Lee) calcify, turning her body into a mangled heap.
More cliched than perceptive, the movie has little to say aging, a topic that might given the movie real weight.
None of the performances are notable, and I stopped trying to keep track of the cast other than to note that Alex Wolff has a somewhat extended turn as the boy of the early scenes at age 15.
Enough. Shyamalan has a hit-and-miss track record that includes movies such as Glass, Signs, The Village, Lady in the Water, and of course, The Sixth Sense.
Less mystique-oriented than some of Shyamalan's work, Old makes a lame attempt at social relevance, basing its screenplay on  Sandcastle, a graphic novel written by Pierre-Oscar-Levy and Frederick Peters.
Not to disappoint his fans, Shyamalan gives Old one of his signature twists, a  big late-picture reveal that's easy enough to predict and which falls flat.
The finale strives for moral complexity but proves as unconvincing as the rest of a movie that already has drowned  in shallow thematic waters.
Posted by Robert Denerstein at 3:35 PM