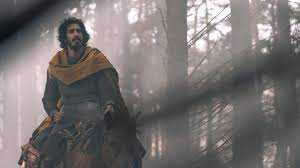 Alluring and visually arresting, The Green Knight takes place during the time of Arthurian legend but hosts no knights in shining armor. The armor is tarnished, as are the lives of most of the movie’s characters.
Although it boasts a fair measure of squalor, mud, and brutality, Green Knight hardly qualifies as realistic. Based on the 14th Century poem, Gawain and the Green Knight, the story lives entirely in the realm of legend.
The Green Knight of the title appears early in the movie so there’s no spoiler in telling you that he’s a creature with a tree-like body and a head made of bark. He creaks when he moves. Know this, though. As writer/director David Lowry treats The Green Knight, he's no joke -- and neither is a movie that haunts, unsettles, and holds us in its visionary grasp.
The story follows a simple enough outline.
On a Christmas morn, The Green Knight (Ralph Ineson) shows up at King Arthur’s court. He addresses the Round Table, asking whether anyone will accept the challenge he’s about to throw down. Perhaps motivated by ambitions to become a knight, only Gawain (Dev Patel) responds.
Here’s the bargain: Whatever Gawain does to The Green Knight, he’ll have to submit to the same fate a year later. Gawain beheads the Green Knight, who picks up his detached cranium and departs, laughing as rides his horse into the mist.
If the general arc of the story is straightforward, the details sometimes blur the border between mystery and confusion. Scene-to-scene, Green Knight becomes increasingly strange as Gawain — once a carousing youth who liked to drink and womanize — tries to demonstrate his honor.
After a year of being treated royally, he heads (you’ll pardon the pun) for his promised rendezvous with The Green Knight.
It’s not exactly a pleasurable trip. Gawain encounters vandals on the road who leave him for dead. Barry Keoghan has a compelling turn as The Scavenger, one of the thieves who attack Gawain.
Gawain also meets a woman who says that she’s St. Winfred (Erin Kellyman). She wants him to retrieve her skull from a pond. He says she already has a head. It looks like I have a head, but — trust me — I don’t, she tells Gawain.
When he meets a nobleman (Joel Edgerton) and his wife (Alicia  Vikander),  sexual currents begin to flow.
Sarita Choudhury appears as Mother/Morgan Le Fay, a witch, a seer and Gawain's mom, dual faces of the same character.
Sean Harris's King Arthur can seem riven by doubt. For the record, the movie refers to him only as King. He's also Gawain's uncle.
I haven’t even mentioned the talking fox that becomes Gawain’s companion.
That may sound Disneyesque, but again take heed: Nothing about Green Knight has a family oriented feel. Lowry not only wants to tell a mythical story, he wants to create a mythical reality — and he comes very close to succeeding at a task that could have gone terribly wrong.
Lowry nicely fits the characters into the environment.
As Gawain, a bearded Patel winds up with a tortured face you might see on a religious icon.
The Green Knight may be an angel of death — or at least that’s how I saw it.
There were times when I wished Lowry had restrained the impulse toward mystery — at least a bit. The dialogue often seems whispered as if the characters are living in a secret world that we can’t totally penetrate.
You need to be comfortable with that feeling to go along with Green Knight. For the most part, I was and I did.
Reservations? Some. Dimly lit images make you long for the presence of a bit of clarifying light — even though electricity had yet to be invented. I understand the impulse to place a mythical tale in a naturalistic environment, but enough is enough.
Various sections are titled but the headings sometimes flash by too quickly for easy reading.
Viewers may be puzzled by the movie’s ending, which is subject to interpretation, but the overall message speaks with power. The world may be forbidding, but Gawain can’t escape the most essential condition of the human contract: He must die.
What is the honor that Gawain sought to achieve on his journey? Perhaps nothing more than being ready when the time of departure arrives. In the end, debts must be acknowledged: Payment is due.
Posted by Robert Denerstein at 3:35 PM

Interesting review, I felt the movie was overall kinda boring, my interpretation was that after showing coverage at the end the green night pointed for him to return home and let him go (with a bit of humor)..though I like your interpretation as well..also I wonder if I would appreciate the movie more if I would have read about this in college or a novel like many seem to have..give the movie a C+ though it looked pretty and good acting..all the best