Both Nine Days and John and the Hole demonstrate what can happen when filmmakers attempt to say a lot with what appear to be fairly limited resources. Each film has a sense of minimalism that creates a feeling concentrated sparsity. And, each relies heavily on the performances of relatively small casts. In my view, neither film can be considered entirely successful. Both, however, contain elements of interest with Nine Days emerging as the better film. 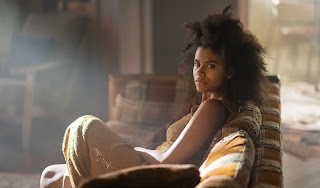 No one likely will fault Nine Days for lack of ambition. It may take a while to figure out what's happening, but it eventually becomes apparent that director Edson Oda has created a  world in which souls compete to decide which one will  be born. The souls, each represented by the movie’s characters, are evaluated by Will (Winston Duke), an even-tempered man who lives in a modest house in the middle of an arid landscape. Will, we learn, once was alive but has been consigned to the role of selector. Assigned by whom? The movie never says. The catch: The unselected souls return to the oblivion from which they emerged. Will doesn’t live in a high-tech world: He tracks his choices on banks of old-fashioned televisions equipped with VCRs. Generally unflappable, Will nonetheless is shaken when one of his choices --  a promising young violinist -- commits suicide. Does her death prove that Bill is fallible? Bill operates alone, but has a friend (Benedict Wong) who provides advice -- not all of it welcome. The story revolves around the souls that show up for evaluation. They include Alexander (Tony Hale), a guy for whom life would mean one long chill session, punctuated by beer and buddies.  Other souls display confidence (Bill Skarsgard), loneliness (Arianna Ortiz), and doubt (Mike Rysdahl). The main drama unfolds between Will and Emma (Zazie Beetz), a free-spirited woman who seems like Will's best option. Perhaps because of the early-picture suicide, Will worries that Emma may not be strong enough to survive the world’s brutalities. A late-picture monologue delivered by Duke nearly justifies a movie that doesn't dot every "i” or cross every "t." In other words, Nine Days doesn't always make sense. But if you stick with it, Oda eventually delivers  a poignant conclusion about the pain of loss and what it means to be alive.
John and the Hole 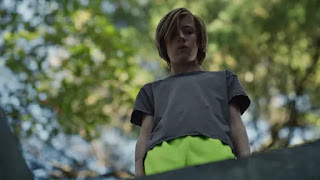 First time director Pascual Sisto seems to be trying to get at something deep with John and the Hole, although I'm not sure what. Sisto tells a simple story: Thirteen-year-old John (Charlie Shotwell) drugs his parents (Michael C. Hall and Jennifer Ehle) and his sister (Taissa Farmiga). He then drags them into an abandoned, half-finished underground bunker. Too steep for them to climb out, the hole isolates the family from neighbors or passersby. Mostly expressionless, John seems like a kid who's conducting an experiment. What would life be like if he took over the household, started draining Dad's money from an ATM, and invited a friend over to play video games. John and his pal also hold one another under water in the family pool, hoping for  visions as they get close to drowning. John only intermittently provides his imprisoned family with food? A separate but apparently related story involves a girl named Lily (Samantha LeBretton) whose mom (Georgia Lyman) reads her a story called John and the Hole before telling the kid that she's on her own.  No rebel without a cause, John simply exists, a teenager who does the unthinkable because ... well ... who knows? I stuck with the movie but never really connected to a story that seems to want to explore the disconnect between adolescents and adults, but does so without offering much by way of edification. There's no faulting the actors but the movie picks up John's hollowness and, in the end, feels far too abstracted to find any real life.
Posted by Robert Denerstein at 4:10 PM