Honk for Jesus: Save Your Soul 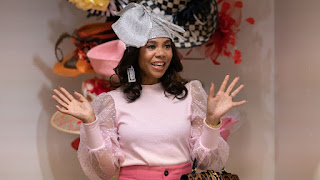 Writer/director Adamma Ebo tackles the hypocrisies of a Black megachurch in Honk for Jesus. Save Your Soul, a muddled satire that seems unsure how hard it wants to hit. I have no idea what Ebo believes when it comes to religion but her movie can confound as it tries to blend comic and serious elements. Decked out in some of the year's most flamboyant costumes, a commanding Regina Hall plays the First Lady of the Atlanta megachurch where her husband (Sterling K. Brown) presides. Early on, we learn that Brown's pastor Lee-Curtis Childs has disgraced himself. He's busy warding off suits by former male congregants who have claimed sexual abuse. Hall's Trinitie Childs stands by her man, even though she knows he has foundered on the rocks of what the church regards as a forbidden temptation. Hall holds the movie together as Brown conveys the fallen pastor's attempts to regain his pulpit privileges, which include an immaculately groomed mansion, a sleek Bugatti, and celebrity status. A rival couple (Nicole Beharie and Conphidance) prepares to lure the Childs's disillusioned flock to a new venue. Hall and Beharie give the movie its backbone, even though its broadly comic gestures and moments of high drama can't compensate for an already depleted mock-doc approach. The movie, which includes Trinitie's donning of white face for a weirdly misguided roadside promotional effort, can't resolve what feels like uncertainty about how sharp a satiric knife to wield.
The Good Boss 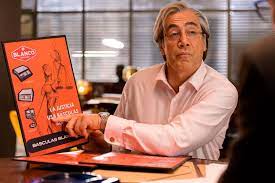 Javier Bardem's Julio Blanco runs a company that manufactures scales. Julio claims to care about his employees, insisting that they've become members of an extended family. That’s true if you happen to be part of a family that gives you a trinket and a hug as it pushes out the door. Alternately smarmy and exasperated, Julio deals with a cascading series of problems on the eve of a visit from a team of judges who will decide whether the company receives a coveted award for its achievements. Julio wants to win, but layoffs -- notably of a protesting former employee (Oscar de la Fuente), marital problems of an important manager (Manolo Solo), and Julio's dalliance with a slyly seductive intern (Almudena Amor) --  push him toward extremes. Otherwise, director Fernando Leon de Aranoa, who also wrote the screenplay, sketches in upbeat strokes that allow Bardem to build a wry performance around Julio's well-practiced duplicity. Thanks to Bardem and a fine complementary cast, The Good Boss amuses, even though it takes a darkly jolting turn as the 10-day period before the factory's inspection draws to a close. I wouldn't take The Good Boss as a definitive critique of capitalist hypocrisy. Still, as an enjoyable comedy and a showcase for Bardem, it can be as diverting as it needs to be.
Posted by Robert Denerstein at 11:10 AM