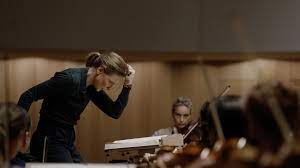 Tar, an intensely realized drama starring Cate Blanchett as a revered conductor, extends beyond the world of classical music to take a penetrating look at the ultra-successful career of Lydia Tar, a fictional character who represents what we've come to regard as star power.
The undisputed center of her world, Lydia's personal life can't be separated from her musical life. She lives with her wife (Nina Hoss) and her daughter (Mila Bogojevic) in Berlin. Hoss's character also happens to be first violinist in Berlin's Philharmonic, where Tar presides as principal conductor.
To ensure that we appreciate Lydia's musical cred, Field opens the movie with an on-stage interview at Lincoln Center. The New Yorker's Adam Gopnik interviews Lydia, giving her ample opportunity to demonstrate an incisive understanding of her role.
We also watch as Lydia teaches a master class at Juilliard. She argues with an identity-conscious student who brings an aggressively woke attitude to the work of Bach. At least for this student, Bach represents the epitome of dead white man irrelevance and misogyny.
The tense exchange suggests that Lydia will encounter more contemporary issues before the drama concludes. Maybe she isn't as shielded as she believes.
No one questions Lydia's bona fides: She was mentored by Leonard Bernstein ("Lenny" to her) and has conducted in Boston and New York. She has a Ph.D. from Harvard and has won an Emmy, a Grammy, an Oscar, and a Tony. She's about to publish a book, immodestly titled Tar on Tar.
Gender issues? She can't be bothered. She's above them, assured of her position by talent, achievement, and superior intelligence.
A dazzling Blanchett fills every scene with agitated anticipation. When she conducts, it looks as if she's mining veins of furious energy.
The bulk of the story takes place in Berlin, where Lydia is set to record Mahler's Symphony No. 5. She faces problems. Her assistant conductor (Allan Corduner) has lost a bit off his fast ball. Her assistant (Noemie Merlant) has begun to resent her demanding, arrogant boss.
Lydia's the kind of boss who promises much but isn't beyond pulling the rug out from under anyone she deems unworthy.
Jealousy and intra-orchestra rivalry arise when a young cellist from Russia (Sophie Kauer) lands the featured role in Edward Elgar's Cello Concerto in E Minor, an opportunity a veteran cellist thought she deserved.
Lydia bristles with kinetic spark. She runs through the streets of Berlin. She attacks a punching bag. Cutting and angular gestures can make her imposing in the way that someone who’s super-smart can be threatening to others.
The drama comes to a boil when Lydia faces charges of  sexually abusing a young mentee in New York, undermining the woman's career, presumably for refusing the conductor's advances.
Field leaves questions of innocence or guilt unsettled -- although the ensuing turmoil leads to an ending that's not nearly as original as the rest of the movie.
After the story dips into the world of social media and MeToo-ism, it seems to be punishing Lydia for her arrogance in ways that seem both humiliating and, sadly, a bit conventional. The great person's untouchable world collapses.
Field (In the Bedroom and Little Children) creates a movie of jagged edges, slicing through the narrative like a violinist with a wicked bow.
For her part, Blanchett isn't just playing a character. She's commanding the movie, pushing the story forward and keeping us glued to the screen as Field demonstrates that power -- even when built on earned authority -- can be abused.  Tar stays with you, possessing you in much the same way that Lydia attempts to possess everything she touches.
If Tar were only about power, it would be interesting, but Blanchett’s performance heightens everything, outraging, alluring, and making us feel the consequences of public stature in the hands of someone who has the capacity to destroy, as well as to create.
Posted by Robert Denerstein at 3:10 PM