Summary: Tim Burton's big-screen adaptation of the Stephen Sondheim's "Sweeney Todd" may not be a musical triumph, but Johnny Depp and Helena Bonham Carter are fine actors, acceptable singers and gutsy artists. Moreover, the entire production has a dark and vicious gleam that seems entirely right. 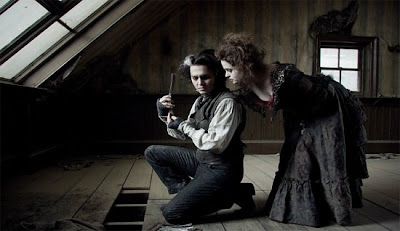 On the way out of a preview screening of Tim Burton's big-screen adaptation of the musical "Sweeney Todd," I heard someone mutter, "What garbage!" This quick condemnation made me think that this sometimes gruesome movie might be in for a rough ride at the box office, particularly among those who don't understand that they've purchased a ticket for a musical about an aggrieved and apparently remorseless serial killer.

Depp, who in addition to being a fine actor seems to specialize in weird hairdos, sinks deeply into the role of the notorious Demon Barber of Fleet Street, and Burton -- no slouch when it comes to darkly hued material -- makes the movie his own while still honoring Sondheim's intent.

Not surprisingly, Burton also refuses to shortchange those who expect gore in a story about a man who kills with a razor. Be forewarned: You can feel the repulsive gushing of blood as Sweeney plies his unholy trade in a quest for the vengeance to which he sees himself as richly entitled. I don't know what it means, but Depp ("Edward Scissorhands") again joins forces with Burton in a story involving sharp objects. (In fairness, the two have worked together in other capacities. Witness "Corpse Bride," "Sleepy Hollow" and "Ed Wood.")

Sweeney is cold-blooded and dead-eyed, but Bonham Carter's Mrs. Lovett is no prize either. Mrs. Lovett delights in making meat pies out of the remains of Sweeney's victims, corpses that are unceremoniously dumped into the basement of her pie shop. As interpreted by Bonham Carter, an actress who also seems to have a knack for hairdos that obey no rules, Lovett is both conniving and loving. She's devoted to Sweeney in ways that make her both lover and accomplice.

Alan Rickman, whose voice can be smooth as a flat prong on the devil's pitchfork, plays Judge Turpin, the man who wrongly sentenced Sweeney -- then known as Benjamin Barker -- to a 15-year term in prison. Worse yet, the judge raised Benjamin's daughter (Jayne Wisener) and now keeps her as a prisoner. He hopes to use her to satisfy his most lascivious cravings.

Just when you thought the movie was weird enough, up pops Sacha Baron Cohen in a cameo as Signor Adolfo Pirelli, a barber who dares to challenge Sweeney's tonsorial skills.

Despite the presence of such goodies, fans of the musical should know that Burton has cut the story from three hours to two and you won't hear every tune that graced the Broadway and touring productions.

"Sweeney Todd" may not be the kind of musical that leaves you humming to yourself on the way out theater. The movie has (as it should) a truly ghastly quality. Don't be surprised, though, if "Sweeney Todd" garners Oscar attention for cinematographer Dariusz Volski and production designer Dante Ferretti. That's as it should be. "Sweeney Todd" is a dark beauty of a film that alters Sondheim's musical for the screen without cutting its cold heart to pieces.
Posted by Robert Denerstein at 7:00 AM