Bluegrass in Belgium? You bet

But music isn't the only stand-out in The Broken Circle Breakdown. You'll also find plenty of heartbreak. 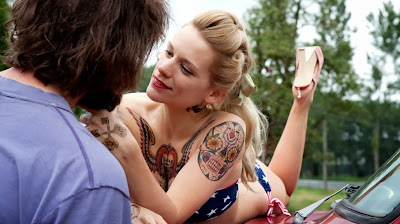 An adorable kid with cancer. A soundtrack loaded with country music. Guys wearing cowboy hats, and driving pickup trucks. A woman ornamented with enough tattoos to decorate a small fleet of sailors on shore leave.

These are but a few of the ingredients that made a committed urbanite like me less than eager to watch The Broken Circle Breakdown, a Belgian import built around characters who are fascinated by America, particularly the alternately rhythmic and plaintive tunes that once helped downtrodden residents of Appalachia cope with hardscrabble lives.

Initial reservations aside, I'm certainly glad I ignored by own biases because director Felix Van Groeningen hits an emotional jackpot with this story about two lovers whose initially giddy but ultimately troubled relationship gives the movie its beating, vibrant heart.

Alternating between the couple's problematic present and its often delirious past, Van Groeningen tells the story of bluegrass musician Didier (Johan Heldenbergh) and his tattoo artist wife Elise (Veerle Baetens), who also happens to be a fine singer and who's quickly incorporated into Didier's band.

Along with their fellow musicians, Didier and Elise enjoy an upbeat bar-band life that's enriched by music, camaraderie and care-free exuberance.

Although he's initially thrown by Elise's unexpected pregnancy, Didier seems to adapt to fatherhood quickly: He clearly loves his daughter Maybelle (Nell Cattrysse), and has more than a little difficulty coping when she's diagnosed with cancer. We know about Maybelle's grave illness from the start because the movie opens in the hospital where the six-year-old begins her treatment.

Many of the musical scenes and much of the courtship between Didier and Elise play at levels that are so upbeat they're dizzying. The underlying question, I suppose, is whether Didier really understands the pain at the heart of some of the music that he plays. Is he playing with authenticity or is he playing at authenticity?

Van Groeningen keeps bringing the movie to a boil and then taking all the fizz out of it, showing us again and again that a fun beginning doesn't always lead to a pleasant conclusion.

Broken Circle Breakdown -- named for the tune Will the Circle be Unbroken -- often flirts with corniness. Didier has a shaggy, purportedly endearing quality that's borderline annoying: An appreciative Elise enjoys his antics -- at least until she no longer can.

But as the movie progresses, Van Groeningen strips away the excitement of new love to show us depths of pain and sadness that may have been there from the start. Scenes in the present don't just alternate with the past, they comment on them, gradually expanding our knowledge in ways that give them new meaning.

Toward the end, there's an almost over-stuffed quality to the movie, which tries to jam an awful lot into an essentially narrow frame.

In one late-picture scene, for example, Didier unleashes his rage during a performance, ranting about the way religion has undermined the science that might help those suffering with cancer. By that time, the drama has shifted to focus on the different ways in which Didier and Elise try to cope.

You come away from Broken Circle feeling that life doesn't always make sense, but knowing, too, that sometimes music can help some folks carry on despite the pain.

True to the movie's dual concerns -- music and personal tragedy -- Van Groeningen also understands that not everyone can bear the worst burdens. That knowledge keeps his movie from turning into one more helping of cinematic self-help. Broken Circle Breakdown makes for an emotionally rich experience in which not all pain and suffering can be eased.

For some, there simply can be no comfort. Others choose to play on. I wonder if Van Groeningen isn't asking us to respect either choice.

Posted by Robert Denerstein at 1:15 PM