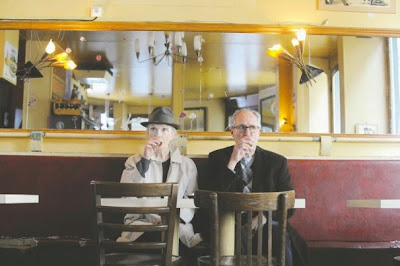 Meg and Nick Burrows are too young to be preoccupied with the prospect of imminent demise and too old to entertain delusions about where their lives are headed.

After 30 years of marriage, they've decided -- perhaps because Nick pushed for it -- to celebrate their anniversary weekend in Paris.

That sounds romantic, but Meg (Lindsay Duncan) and Nick (Jim Broadbent) are in a marriage that has lost much of its sparkle.

Their grown son has become a human barnacle, sponging on their fragile finances. A professor at a second-rate college, Jim has just lost his job for running afoul of the PC police, and Meg, also a teacher, has given up on sex.

Written by Hanif Kureishi (My Beautiful Launderette) and directed by Roger Michell (Notting Hill), Le Week-End is not an exercise in Bergman-like despair: It's a comedy -- albeit one that tastes bitter around the edges.

The Paris trip sours from the start. The couple checks into a hotel that depresses Meg. She instantly detests its brown decor. Nick tries to keep up her spirits, but Meg stalks out, forcing the couple to take a budget-busting suite at a luxury hotel.

Duncan's Meg can be cruel and remote; Broadbent's Nick tries to solider on as he weighs the inescapable failure of a life that never fulfilled its promise.

In a clear-cut case of insult-to-injury, the couple runs into Morgan, an American who knew Jim from shared days at Cambridge. Le Week-End offers Goldblum an opportunity to do some his best acting in years.

He's playing an arrogant academic who has just published a book. He lives in Paris with the adoring wife, the young woman for whom he left the U.S. and his first wife. His hippy son (Olly Alexander) has arrived for a weekend visit.

Morgan enjoys his status -- even though he's aware enough to know that there'll come a point when his young, pregnant wife (Judith Davis) runs out of adoration, and he'll be left exposed, a pompous, self-absorbed man.

Kureishi is a smart writer who pushes his characters into one uncomfortable situation after another, some of them leavened by the wit of the dialogue.

A dinner party scene at which Nick makes a startling speech almost goes over the top, but Nathalie Durand's cinematography, Michell's generosity in putting Paris on display (its beauty may be a taunt to Meg and Nick) and the wit and candor of the performances make Le Week-End a trip well worth taking.