Few laughs on this road to revenge

The Other Woman grates more than it amuses. 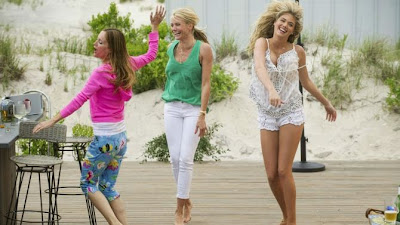 Three women avenge themselves on a philandering man in The Other Woman, a witless comedy that forces stars Cameron Diaz and Leslie Mann into indecorous displays of physical comedy as they grapple with a contrivance-laden script.

When the movie opens, Diaz's Carly Whitten, an attorney, is ensconced in an affair with a handsome businessman (Nikolaj Coster-Waldau). Carly thinks she's finally found her soul mate.

It doesn't take long for Carly to learn that the man for whom she's scrapped all other relationships is married to a character played by Mann. The script then labors to inform Mann's Kate that her husband Mark is a serial philanderer and all-around louse.

The twist: Carly and Kate develop an awkward, odd-couple friendship that progresses from one in which Kate drives Carly crazy to one of mutual -- if improbable -- respect.

Lest the men in the audience become bored with all of this sisterly solidarity, Melissa Stack's screenplay introduces another mistress, a bombshell played by model Kate Upton, who nicely fills out a swimsuit, as she did in the recent Sports Illustrated swimsuit issue.

Upton's playing a character named Amber, and director Nick Cassavetes takes as much advantage of her pulchritudinous glow as possible.

Mann overdoes Kate's whining to the point where it becomes abrasive: Diaz soldiers on as best she can, playing the savviest woman of this trio, a lawyer who's never seen practicing law.

Moderation is not a virtue here: Not content with turning Coster-Waldau's character into a rotten husband, the screenplay also contrives to make him a felonious fraud.

I suppose it's necessary to point out that Don Johnson (remember him?) makes a brief appearance as Carly's pleasure-seeking father, and that a lively Niki Minaj portrays Carly's secretary.

If you believe in any of these characters, you may be able to enjoy a comedy with a jukebox musical score and a sense of humor that turns a laxative joke into a comic high point. Need I say more?