Where dreams and memory meet 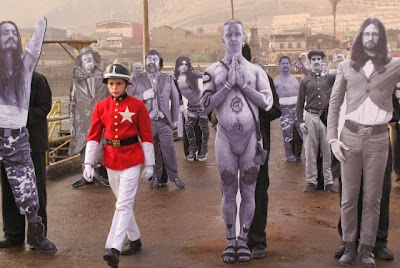 Recently, the documentary Jodorowsky's Dune told us about an epic sci-fi film that Chilean director Alejandro Jodorowsky planned, but never was able to make, an adaptation of Frank Herbert's epic 1965 sci-fi novel.

Best known for cultish movies such as El Topo (1970) and The Holy Mountain (1973), Jodorowsky hasn't directed a movie since 1990's The Rainbow Thief, which was barely seen in the U.S.

Always a bit of a surrealist, Jodorowsky returns to Earth with Dance of Reality, which -- for him -- means grounding a story full of fantasy and imagination in a matrix of historical and autobiographical memory.

Dance of Reality is a cinematic memoir, presuming that memoirs can be records of both dreams and reality -- or perhaps of realities that live on as dreams.

In Dance With Reality, Jodorowsky -- who occasionally appears in the film as himself -- tells the story of his relationship with his parents, but Jodorowsky's father (played by the director's son Brontis Jodorowsky) tends to dominate.

A Ukrainian Jew transplanted to Chile, Jamie Jodorowsky lives through a psychological and spiritual progression that begins when he tries to instill his young son (Jeremias Herskovits) with the trappings of manhood.

For young Alejandro, Jamie becomes a task master, a martinet who tries to teach his son courage by way of controlled emotion.

As a Jew, Jamie's an outsider in the tiny coastal village of Tocopilla, where much of the story takes place. He's never fully accepted -- even though he takes an active role as a Communist in opposition to real-life dictator Carlos Ibanez and as a volunteer fireman trying to keep his community safe.

Jamie's mother (Pamela Flores) connects her son with her lost father, a dancer who died in the Ukraine. She wants to keep young Alejandro in his childhood -- albeit as child with whom she has a flirtatious relationship. At one point, she dances nude with him.

A big busted woman of ample personality, Alejandro's mother approaches life as if it were an opera, so much so that Jodorowsky has her singing all of her dialogue -- some as arias, some as recitative.

Although the movie has a vigorous political life, Jodorowsky seems more interested in exploring symobolic portrayals of manly power and will: Why else would Jamie have a picture of Stalin hanging in his living room?

A segment in which Jamie goes to work as a groom for Ibanez seems strained, perhaps a way of exploring the morality of using force as a means of achieving justice.

Jamie initially accepts the job so that he can get close enough to the dictator to assassinate him. Will he have the stomach to go through with his plan? Should he?

Jamie's a man of intense contradiction, a purported champion of the poor whose ownership of a lingerie shop makes him part of the bourgeoisie, a man who may lack the rigidity necessary to be a true ideologue. He's not Stalin.

Because the movie has a narrative spine, Jodorowsky is free to introduce dream-like imagery -- some of it shocking (his mother reviving his ill father by urinating on him), some fanciful (an encounter with a character called the Theosophist) and some of it eerily compelling (the funeral of a drowned child).

Jodorowsky, who's 85, has made a movie that could well serve as his swan song. When we see him in the movie, he's usually embracing his younger self, providing assurance that the boy will find a path on which to live -- and that both man and boy ultimately will vanish into the encroaching mists of time.

Dance of Reality may not be entirely comprehensible, but its poetic allure makes it one of the more intriguing movie's of the year thus far, a work from someone who clearly regards cinema as art, but isn't so overwhelmed by the idea that he leaves the rest of us totally behind.