'Maleficent:' A new take on an old tale

Sleeping Beauty for the 21st century -- beautifully crafted, but not always captivating. 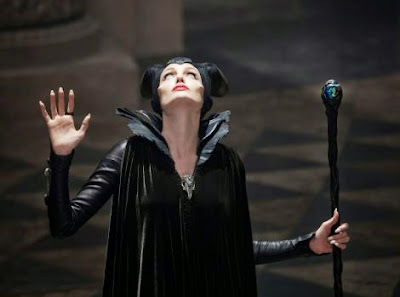 Angelina Jolie can be positively wicked as Maleficent, an aggrieved fairy seeking revenge against the king who stole her wings.

Maleficent, of course, is the title character of Disney's reworking of the Sleeping Beauty story, a tale the studio told in a classic helping of 1959 animation.

With her cheek bones built to harrowing heights by make-up whiz Rick Baker, Jolie flashes predatory white teeth and keeps a cool sense of menace about herself.

She's striking and also a bit freaky looking in headgear that gives her a devilish pair of horns.

Director Robert Stromberg, production designer on movies such as Tim Burton's Alice in Wonderland and Sam Raimi's Oz the Great and Powerful, creates an encompassing visual environment while telling the Sleeping Beauty story in a way that gives it a bit of feminist spin -- and provides us with the inside scoop on a story we thought we knew.

Early scenes introduce us to Maleficent as a child (Isobelle Molloy), a happy fairy girl who establishes a relationship with a human, a boy named Stephan (Michael Higgins).

Stephan will grow up, discover ambition, and steal Maleficent's wings, thus enabling himself to become king of the humans and forcing his childhood flame to turn toward evil.

The Sleeping Beauty of this tale -- Elle Fanning's Aurora -- is a smiling, blonde-haired girl who seems carefree and guileless -- and not nearly as intriguing as Maleficent.

Aurora's father, of course, is the grown Stephan. As king, Stephan (Sharlto Copley) insists on keeping his daughter away from the palace until after her 16th birthday.

To that end, Aurora is raised in a secluded forest cottage by three comically addled fairies (Imelda Staunton, Juno Temple and Lesley Manville).

All of this has to do with the vengeful curse that Maleficent put on Aurora at her christening: In a fit of icy rage, Maleficent condemned Aurora to prick her finger on a spindle at age 16. She'd then fall into a death-like sleep from which she could be roused only by the kiss of true love.

It's just here that the story takes an unexpected turn, about which a little must be said.

During her time in the woods, Aurora develops a relationship with the watchful Maleficent, and the movie raises a question that generates interest without much suspense: Will Maleficent stick to her guns or will she soften as she gets to know Aurora? How bad a badass is Maleficent really?

The tale seems to have been calibrated to maximize CGI: There are many odd-looking creatures, some of whom may a bit scary for the youngest kids.

Stromberg does a nice job with a character named Diaval, a crow that Maleficent transforms into a variety of different creatures, all of them charged with doing her bidding.

Some movies are pure stinkbombs; others are total winners; still others are decent in their way, but may not scale the intended heights.

That seems to be the case with Maleficent, a movie that engages fitfully and flies high at times. Beautifully crafted as it is, Maleficent doesn't consistently provide the desired level of captivation.