The True History of the Kelly Gang is a bit of a jumble, but it's not easy to shake off. 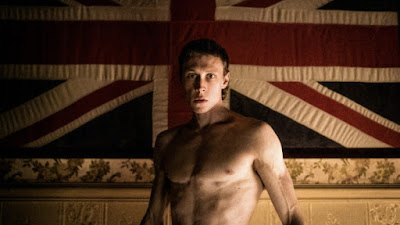 A man-child sprung from an abusive boyhood, Ned Kelly became an outlaw legend in Australia. Kelly also became the subject of author Peter Carey’s Booker Prize-winning novel, The True History of the Kelly Gang, source of a wild-ass movie of the same name.

As the adult Kelly, George Mackay (1917) gives a scowling, fiery performance. Mackay's Kelly is pushed into violence through a mixture of what might be psychopathy, conviction, and horrible circumstances. Like many of the Irish in British-ruled Australia of the mid-19th century, Kelly was born into an oppressive, impoverished world.

Among his many peculiarities, Kelly wore a bulletproof helmet — inspired by pictures he’d seen of the USS Monitor. His gang sometimes dressed in … well … dresses. Like the western outlaws he resembled, Kelly thrilled and terrorized.

All of this can seem strange to American audiences who either haven’t read Kelly’s novel or are otherwise unfamiliar with Kelly whose life was a study in brutality — both of the rough terrain on which he lived and the violent behavior to which he was driven.

Kurzel doesn’t so much plumb psychological depths as he carries on a flirtation with the motivations of his characters. Kelly loved his mother (Essie Davis), but she had strange ways of returning his love. While still a boy (played by Orlando Schwerdt), Kelly was sold by his mother to an outlaw, Russell Crowe’s Harry Power. Power became a kind of surrogate father to Kelly, whose real father died after serving a prison sentence. Kelly was 12 at the time.

Power alternately introduces the boy to the high life (steak dinners) while encouraging his brutality. Power accepted no one who couldn’t, as he put it, “pull the trigger.”

Looking bearded, thick and unkempt, Crowe appears in an early chapter of the story. When Power vanishes from the screen, Crowe's absence is felt, but not before he reminds us of how good he can be.

The duplicities of the British are deeply ingrained in a British constable (Nicholas Hoult). Kelly's romantic life, such as it was, focuses on a prostitute portrayed by Thomasin McKenzie. Another British officer (Charlie Hunnam) sexually harasses Kelly’s mother in the movie’s early going, part of the movie's attempts to show the strange intimacies between oppressors and the oppressed.

To his credit, Kurzel likes to blur lines. We don’t always know whether to feel sorry for Kelly or be revolted by him. Crowe’s character is down-to-earth but homicidal, and Kelly’s mother proves a mass of contradictory impulses: Love and cruelty among them.

I wasn’t tempted to spend much time researching the real Kelly and the film begins with a wink that subverts any need for pinpoint accuracy. Nothing you’re about to see is true,” we’re informed by a title card.

Kurzel’s feverish approach often left me bleary-eyed, but the director and his cast have hold of something weird, raw, and gripping, a subject they either couldn’t or didn’t want to contain. But even when we don’t quite know what to make of The True History, it's difficult to turn away.