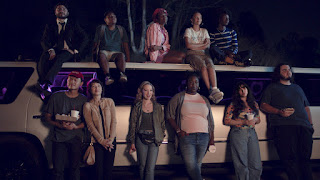 I've never been to a poetry slam.
You need to know that because I'm about to review Summertime,  a movie in which a collection of 25 “oral” poets representing various parts of the Los Angeles experience recite their work: women, blacks, Latinos, Koreans and gays.
You may want to think of Summertime as a slam+.
The movie derives much of its energy from the palpable need  these young people feel to be seen and heard. Summertime takes place during a single day and travels to a variety of Los Angeles locations, Venice Beach and the Hollywood Hills included.
Members of the movie's ensemble recite their poems which, in my view, vary in impact. A young black gay man (Tyris Winter) reveals himself through a series of Yelp reviews, one of a restaurant where he objects to the trendy menu and its upscale prices. His quest for an old-fashioned hamburger becomes one of the movie's motifs and, perhaps by extension, a critique of the encroaching niceties of gentrification.
Director Carlos Lopez Estrada (Blindspsotting) also includes another running bit. Anewbyss and Rah (Austin Antoine and Bryce Banks) make the journey from unrecognized rappers to mini-stars who learn a disappointingly cliched lesson about the emptiness of the celebrity they had set out to achieve.
Estrada does a good job of creating the threads that tie all of the characters into a somewhat unified whole.
But the movie also has an us-against-them quality that can feel contrived. In one segment, Mila Cuda defends her sexual orientation to a passenger who objects to watching two older women kissing on a LA bus. It feels like a set-up, which — at least literally — it is. It's a bit of staged conflict and we know the outcome the minute the poetry even starts.
Later, Marquesha Barbers earns cheers from her companions and presumably from the audience for confronting a former boyfriend who ditched her because she did not conform to his ideas about beauty.
My favorite moment arrived when a rebellious Asian man (Gordon Ip) rails about the indignities heaped on him by customers at the burger joint where he works. He reaches a breaking point and begins a tirade that could serve as an anthem for the nation's fast-food workers.
The finale arrives when a dispirited Anewbyss and Rah turn their stretch limo over to the other poets who then are driven to a spot that offers a gleaming scenic overview of their city at night.
I can't say Summertime convinced me that every voice can fill  a platform but it's difficult to dismiss Estrada's attempt to tell us that the city's overlooked and sometimes marginalized youth deserves to be heard.
Posted by Robert Denerstein at 1:10 PM