The summer that the music spoke 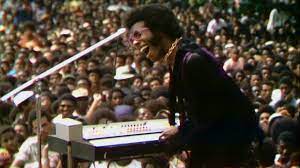 Ahmir Khalib Thompson, better known as Questlove, has taken footage from a series of 1969 concerts in Harlem's Mount Morris Park and turned out a film that does something as well as almost any movie I can think of. Summer of Soul captures the racial climate of the late 1960s and the birth of what someone in the film calls "black consciousness."
Although much of the movie consists of concert footage, the movie stands as a testament to optimism, outrage, and the sheer joy that can be found in music. 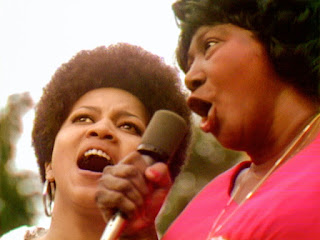 What Questlove presents as one continuous concert actually derived from six concerts that were part of the Harlem Cultural Festival, an event that was filmed by Hal Tulchin but which was not seen, perhaps because much of the nation's pop-cultural energy was being absorbed by Woodstock, which took place at the same time.
The festival was organized by Tony Lawrence, a singer who managed to assemble a killer show.
Although Summer of Soul qualifies as an invaluable and immensely entertaining helping of music, Questlove has done more than build an R&B showcase. He places the festival in the political context of a volatile summer -- assassinations, fractious social divisions, and opposition to the Vietnam War. He's given voice to a mood as well as to the music.

That means the film functions on two important levels. First and foremost, Summer of Soul becomes a kind of encyclopedia of soul music that includes performances by Stevie Wonder, Sly and the Family Stone, B.B. King, David Ruffin (once the lead singer of the Temptations), The Chambers Brothers, and  Gladys Knight and the Pips.
And then there's Latin soul brother, Ray Barreto, and the African-flavored vibes of Hugh Masekela.
Questlove also includes a gospel segment featuring The Staples Singers and Mahalia Jackson. Listening to Jackson and Mavis Staples sing Take My Hand Precious Lord is enough to stir the soul of even the most committed non-believer. Throw in the Edward Hawkins Singers (Oh Happy Day) and you've got as much uplift as one person can stand.
The film builds toward an appearance by Nina Simone, whose stage presence is unmistakably powerful.
Summer of Soul also includes interviews with people who attended the festival.  One interviewee talks about being smitten by Marilyn McCoo of the 5th Dimension (Aquarius/Let the Sunshine), a group that some folks thought was white.
I'm sure that I've neglected to mention something that will strike you when you see Summer of Soul, but I don't want to end this review without telling you that the dynamism, cultural heft, and exuberance of Summer of Soul stands as an expression of solidarity, commitment,  and musicianship that qualifies as a feel-good time at the movies.
Yes, I did say feel-good movie but one with a difference. Summer of Soul refuses to turn its back on the world in which the music sounds its magnificent notes. Summer of Soul chronicles a time when music and its moment became inseparable.
Posted by Robert Denerstein at 11:35 AM