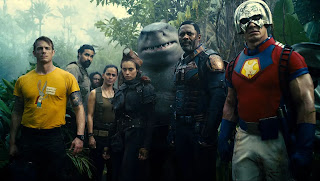 I'm late to The Suicide Squad party, which means that I already know the movie, after receiving generally good reviews, failed to overwhelm at the box office. The Hollywood Reporter wondered whether moviegoers stayed home because of the spread of the delta variant.
But staying home didn't mean missing the movie because it's streaming on HBO Max, which is how I caught up with it.
Director James Gunn (Guardians of the Galaxy) has created what looks like a nihilistic free-for-all built around a group of outcasts recruited by the head (Viola Davis) of a black ops outfit called Task Force X.
The selected team is supposed to destroy a creature called Starfish, an alien that might vanquish the entire Earth and which has fallen into the hands of an evil dictator (Peter Capaldi) of the small island nation of Corto Maltese (fictional) off the coast of South America.
In addition to Margo Robbie’s Harley Quinn, there's John Cena's Peacemaker, Daniela Melchior's Ratcatcher 2, Idris Elba's Bloodsport, and Sylvester Stallone's Nanaue/King Shark. Stallone provides the voice for a shorts-wearing shark-like creature with arms and legs.
If the site of legions of rats doesn't appeal, you might want to think twice about joining The Suicide Squad. Ratcatcher 2 turns out to be a perverse Pied Piper who can muster up armies of rats.
And while we're on the subject of strange creatures, consider David Dastmalchian's Polka-Dot Man, a human covered with polka dots which he can removed be removed and hurled at a foe. Did I mention that Polka-Dot only strikes when he sees his mother’s face in an opponent.
My advice: Don't give this too much thought.
I wasn't counting but Idris seems to get the most attention as a sharpshooter who joins group leader Colonel Rick Flag (Joel Kinnaman) in an adventure that begins strong, can't always sustain excitement but recovers for a finale that's cleverly mounted and funny in the way of such movies.
I supposed it's fair to say that Gunn has provided a worthy redo (sort of) of the much-scorned 2016 Suicide Squad which was directed by David Ayer.
Robbie seems to enjoy indulging Harley's crazy ways and the rest of the cast is up to snuff as a group that, unlike other superheroes, doesn't seem to stand for anything as lofty as truth, justice, and the American way.
They just wanna be part of the abundant action set pieces that Gunn serves up with abandon.
Now, having said all that, a cautionary note:
The Suicide Squad may be the cinematic equivalent of someone who proudly claims to care about nothing — but you know it’s a pose.
Still, the movie's saving grace lies in its willingness to embrace the ridiculous and, in the process,  poke fun at the kind of movie it easily could have been; i.e., one that took itself more more seriously.
One look at the starfish monster -- Starro by name -- tells you Gunn has made goofiness a virtue.
Posted by Robert Denerstein at 1:35 PM