Catching up with 'Language Lessons' 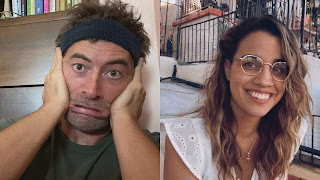 I had no particular interest in a movie in which two people exchange weekly Zoom calls. I've had enough Zoom calls in the last year and a half to satisfy any need I ever had to connect virtually with people -- not that I've abandoned the practice. Screen fatigue partly explains why it took me so long to catch up with Language Lessons, a movie in which a wealthy Oakland resident (Mark Duplass) communicates with his Spanish teacher (Natalie Morales), an engaging young woman who lives in Costa Rica. The language lessons -- a gift from Duplass's character's husband -- aren't exactly met with enthusiasm by Duplass's Adam. Adam already speaks enough Spanish to converse but because he has a couple of years of lessons pending, he goes along with the program. Then, a shocker. Will dies in an accident, and Adam's relationship with Morales’s Carina takes on a different character. It comes as no surprise that the boundaries between student and teacher begin to crumble.   Language Lessons can be viewed as a rom-com in which friendship rather than romance becomes the goal. Duplass and Morales co-authored the screenplay, which Morales directed. She tries to add visual interest by giving Adam a house that invites us to make some guesses about just how well off he might be.  Language Lessons can't entirely overcome the thinness the stems from a two-handed drama conducted via Zoom. For me, the key to the movie's success involves its sincerity, a quality I usually find off-putting but which, in this case, reflects the commitment of two actors who remind us not to overlook something we've been missing: our persistent need for others.