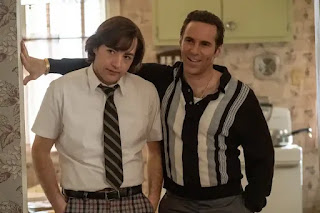 During the course of six seasons, The Sopranos established itself as one of the greatest series ever seen on American television. There are many reasons for this, including our endless fascination with gangster culture, if the word "culture" isn't too much of a stretch here.
Steeped in violence, betrayal and duplicity, The Sopranos was a gangster story with a difference. It centered on Tony Soprano (James Gandolfini), a mob boss with an impressive suburban home, a wife and two kids. We got to know every member of the Soprano immediate and extended family -- and know them well.
The series also introduced a twist that, at first, seemed preposterous. Tony regularly consulted a shrink (Lorraine Bracco) but seldom faced up to his massive appetites. I never counted, but scenes of Tony eating were as abundant as his many infidelities. It seemed impossible for Tony to pass a refrigerator without opening it.
Over time, The Sopranos acquired depth worthy of a Russian novel. We couldn't stop watching.
Now, David Chase -- the show's creator -- has made The Many Saints of Newark, a movie that functions as a kind of prequel to The Sopranos.  At 120 minutes in length, the movie can't offer the complicated flavors and personal intrigue of a series.
We get profanity, violence, infidelities and a look at the young Tony Soprano (played by James Gandolfini's son, Michael Gandolfini). But Many Saints is more period piece — the New Jersey mob circa 1967-1970something — than a probing character study.
Young Tony doesn't occupy the movie's center. That job falls to Dickie Moltisanti (Alessandro Nivola), the father of Christopher Moltisanti, who provides the movie's narration from behind the grave. If you're a series fan, you know that Christopher didn't make it to the end.
Hot-headed and profane, Dickie is Tony’s uncle -- or at least that's how Tony thinks of him. Tony idolizes Dickie and the sequel (screenplay Chase and Lawrence Konner, direction by Alan Taylor) makes Dickie a pivotal figure in determining whether Tony, a bright kid with a penchant for trouble, will follow a mob path or make a different choice.
I have no idea whether non-Soprano fans can relate to the movie because much of the time we're looking for hints of what's to come in the characters we meet.
Does Corey Stoll, for example, make a credible Corrado "Junior" Soprano? (Pretty much).
Does Vera Farmiga, as Tony's mom Livia, seem as if she could develop into the character Nancy Marchand so brilliantly created in the series? (Definitely).
References to the series abound, but The Many Saints of Newark is its own movie — albeit one that’s hampered by a running time that makes it seem as if an entire season of the Soprano's has been reduced to short hand.
Casualties accompany such condensation. Tony's father (Jon Bernthal) doesn't become a big enough figure. We learned almost as much about him in the series when Tony discussed his father with his therapist.
Ray Liotta portrays Aldo "Hollywood Dick" Moltisanti, Dickie's father.  Dickie is involved in a vivid and revolting bit of violence that would have made us gasp had it occurred in a series where we already had spent considerable time forming opinions about Dickie.
Perhaps to add a social wrinkle to the movie, Chase begins the story in 1967; a.k.a., the Summer of Love and continues it in the 1970s.
In 67, racial tension are boiling in Newark, where much of the mob activity takes place. Dickie forms a relationship with a young black man (Leslie Odom Jr.), who eventually develops criminal aspirations of his own.
The Newark riots play a role in creating the movie's atmospherics, but the attempt to give the racial conflict thematic weight feel anemic -- doing little more than underscoring the idea that the world once ruled by these mobsters is changing.
Liotta also plays Dickie's uncle, a man serving life imprisonment for a mob hit. What seem like attempts to turn him into the movie's conscience don't really go anywhere.
Then there's Michael Gandolfini. Although Tony isn't the main character, everything in the movie insists on being weighed against the character we know Tony will become and the world he’ll create. Gandolfini incorporates Tony's mannerisms into his performance, but Michael’s performance can't help but live in the shadow of his late father’s work.
At its best, Many Saints laces vivid brutality with humor and New Jersey color, but it's most stirring moment comes at the end when we finally hear Alabama 3's Woke Up This Morning, the song that played over the opening credits in every Sopranos' episode. Maybe that's where the movie should have begun.
And then there's this: When an artistic endeavor achieves greatness, it might be best to leave it alone.
Posted by Robert Denerstein at 1:10 PM