A lukewarm helping of Woody Allen

Allen travels back to the 1930s for Cafe Society. 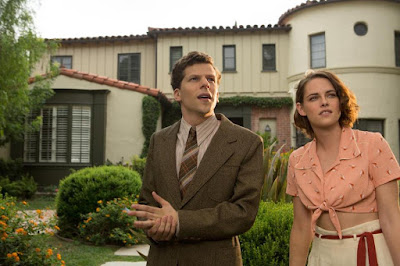 There was a time when a Woody Allen movie felt as if it were entirely of its moment. Anticipation for each new Allen movie ran high whether the director was operating in comic or serious mode. Then came scandal, the onslaught of age and a changing movie environment.

These days, a Woody Allen movie seldom feels like an occasion marked by urgency, so it's probably not surprising that Allen's latest -- Cafe Society -- retreats into the 1930s for a story split between Los Angeles and New York.

Though hardly a knockout, Cafe Days qualifies as a showcase of sorts, less for Allen than for his production designer, Santo Loquasto, and his cinematographer, Vittorio Storaro. Between them, they create a Los Angeles blessed by pre-pollution light and fashionable ease.

The story centers Bobby Doorman (Jesse Eisenberg), a Bronx kid who travels to California in search of a career. Bobby hopes that his Uncle Phil (Steve Carell) will help him get his feet on the ground.

Phil, you see, is one of Hollywood's top agents, a guy who knows everyone.

Bobby's parents (Jeannie Berlin and Ken Stott) disagree about whether Phil will be of much help. Mom says, "yes." Dad is skeptical, but his wife dismisses him as "stupid."

Phil gradually accepts Bobby as a trusted ally. Blood ties, after all, are stronger than the tenuous threads that stitch Hollywood alliances together.

Meanwhile, the story keeps a foot in New York, where it follows the development of Bobby's older brother Ben (Corey Stoll), a gangster whose power grows along with the number of bodies he buries in the cement of metropolitan area construction sites.

Allen -- again with Storaro's help -- has done something I didn't know was possible. He has made Kirsten Stewart, who portrays Phil's secretary, look like a movie star from another era. I don't think anyone has ever made Stewart look more classically beautiful.

Predictably, young Bobby falls for Stewart's Vonnie. The complication: Vonnie is the midst of an affair with her married boss, Carell's Phil. Will Vonnie realize that Bobby is the perfect man for her or will she cling to Phil?

Blake Lively enters the movie late; she plays Veronica, a woman who captivates Bobby -- at least briefly -- when he returns to New York to run Les Tropiques, a nightclub that his older brother Ben has acquired through thuggery.

All of this is narrated by Allen, making Cafe Society seem like one of Allen's New Yorker short stories. The movie passes easily, except for a couple of clinkers. A riff about one of the character's 11th hour conversions to Catholicism (it has an afterlife, Judaism doesn't) and an early-picture bit in which Bobby meets with an inexperienced hooker fall flat.

As the stand-in for the kind of character Allen once played, Eisenberg does well enough; Carell conveys Phil's self-assurance along with bouts of torment, but it's Stewart who emerges as the prize in Allen's ensemble.

Allen eventually unites the New York and Los Angeles parts of the movie, but the dramatic stakes seldom seem high enough to elevate Cafe Society above a lukewarm period piece about a couple of characters who obsess over the lives they might have led.

Different costumes and new actors can't disguise the fact that for Allen, Cafe Society is more of the same -- and the lesser for it.