An 11-year-old boxes, dances and holds the center of a movie. 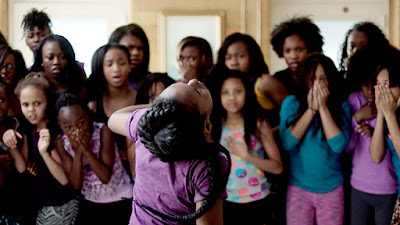 Almost every image in The Fits, a movie about an 11-year-old girl who spends her time hanging out a Cincinnati recreation center, proves oddly evocative.

Put another way, this striking debut feature from director Anna Rose Holmer can't be accused of following anyone else's map. And if it's not always clear exactly what Holmer is after, she deserves credit for pulling us into an environment that feels both real and otherworldly at the same time.

The Fits focuses on Toni (Royalty Hightower), a girl who attends the recreation center with her older brother (Da'Sean Minor), a kid who spends most of his time boxing. Toni works out with the boxers, but she's increasingly drawn to a competitive dance team called The Lionesses.

When Toni joins the Lionesses, she meets Beezy (Alexis Neblett), another newbie. Beezy's outgoing personality contrasts with Toni's reticence. Toni's an observer, the outsider whose silence suggests superior knowledge. Toni fits no mold, and Hightower is the kind of kid you can't take your eyes off.

The dancers span what appears to be a fairly broad age range -- from pre-adolescent to high school -- and their movements tend toward rhythmic frenzy.

For reasons that never are fully explained, some of the girls begin having fits. They convulse, their bodies quaking in trance-like states. The effects seem to wear off, but the practice environment remains unsettled. After a while, a few of the girls say they want to have one of these fits.

Much of what Holmer has in mind involves the gender roles that Toni examines. She pierces her ears. Later, she removes the earrings. She tries nail polish, but eventually scrapes it off. She never entirely forsakes the boys' world of boxing, which she enters as the other girls watch through windows in the gym doors.

We presume that these girls are talking about the boys in the way adolescent girls do. That kind of chatter doesn't interest Toni, who looks for an identity all her own.

I can't say I totally understood The Fits, but I found Holmer's movie absorbing in its fierce insularity. Besides, The Fits speaks in a voice that's too distinctive to ignore.

AND SPEAKING OF DISTINCTIVE VOICES 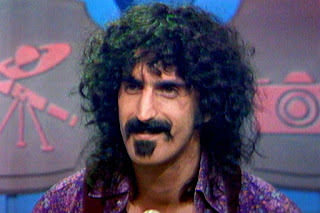 Frank Zappa has been dead for more than 22 years, but his name still evokes memories of an idiosyncratic musician who never hesitated to speak his mind. Director Thorsten Schutte gives us a taste of what was on that mind with Eat That Question, Frank Zappa in His Own Words, a new documentary that assembles performances, rehearsal footage and parts of interviews Zappa gave over the course of his career. Although Zappa says he doesn't entirely trust the interview process, he's surprisingly forthcoming with those who got a chance to talk to him. This is true whether he's discussing his political views, his contempt for the business of music or his dedication to musical exploration. Schutte doesn't shortchange the furor that arose around some of Zappa's supposedly obscene lyrics, but he goes deeper than that, offering a portrait of a composer who stood his ground and, in so doing, spoke out for art, culture, and freedom of expression.