Putting Jason Bourne back into action

Matt Damon returns as an assassin without memory as director Paul Greengrass extends his action set pieces to preposterous extremes. 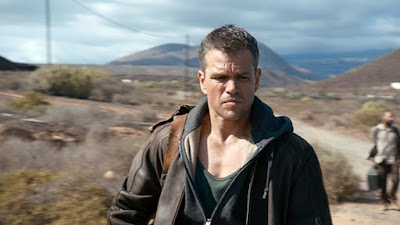 If you want to spend a couple of hours watching Matt Damon play a character who's running for his life, Jason Bourne -- the latest in the series about an amnesiac spy -- might be the movie for you.

If you're looking for something more, you'll probably have to look elsewhere. We all know that the world seems to be gripped by chaos, but reproducing that chaos on screen doesn't always result in a satisfying movie experience.

With director Paul Greengrass returning to the helm and Damon jumping back into the Bourne saddle, the movie turns into a dizzying attempt to build a story around a reveal in which Bourne learns more background about himself that has been hidden from him by the CIA.

Bourne, you'll recall, has been programmed to kill by the CIA. Aside from quick flashbacks from his past, Bourne has no memory of his pre-espionage life. He often finds himself being chased by the very agency that turned him into a lethal weapon.

When Bourne resurfaces in Greece, a CIA chief (Tommy Lee Jones) tries to "put him down," i.e., Jones' Bob Dewey wants to assassinate Bourne with the help of a ruthless killing machine called "the asset" (Vincent Cassel.)

Dewey receives additional assistance from Heather Lee (Alicia Vikander), an ambitious CIA tech genius who seems to be able to locate Bourne whether he's in Greece, Iceland, London, and ... well ... I think stopped caring after Berlin.

The action set pieces tend to be so interminable, I wondered whether Greengrass was trying to set records. And, of course, Greengrass' approach expectedly races over-the-top.

That means logic doesn't always prevail. If Bourne makes a five-story flop onto concrete, don't fret. He'll be on his feet before you can say, "Splat." Like a politician who won't take "no" for an answer, he keeps on running.

The movie opens with Bourne earning his keep as a bare-knuckle fighter in Greece. It doesn't take long for him to wind up on the CIA's radar.

As the story develops, we also meet a tech whiz (Riz Ahmed), a hotshot whose company has been compromised by the CIA. Ahmed's character allows the movie to raise issues about privacy in a time of pervasive on-line activity, but we don't sense that we're supposed to take any of this seriously.

Much of the action takes place in front of CIA surveillance cameras, giving the movie a kind of fractured vision. CGI-enhanced car carnage comes into play, particularly in a ridiculous Las Vegas-based chase involving Bourne and a formidable SWAT vehicle.

In a movie that moves this quickly, acting tends to be more suggestive than deep. A bulked up but deadly serious Damon makes the movie feel like an aerobics workout. Looking as serpentine as ever, Jones tosses off a few off-kilter line readings, and Vikander opts for lots of furrowed-brow concern.

Julia Stiles makes an early picture appearance as Nicky Parsons, a former CIA agent with an agenda of her own.

Greengrass (Bloody Sunday, United 93 and a couple of previous Bourne movies) disorienting approach to action has its fans, and I've been one of them. He can edit a sequence into smithereens and still have it make some sort of sense, but -- in truth -- I got sick of it in this outing.

No matter how much urgency the actors try to bring to their work, the movie's kinetic charge takes precedence as the story works its way toward an expected and slightly depressing possibility: another sequel.

It would have been nice, though, if the filmmakers had been able to make this Bourne revival better than the movies that spawned it.