A Star Trek that emphasizes speed

Director Justin Lin takes over the reins from J.J. Abrams and as Star Trek continues to explore the final frontier. 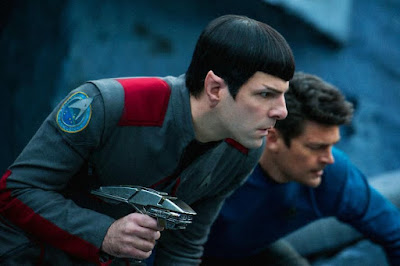 Toward the end of Star Trek Beyond, Captain James T. Kirk tells his principal adversary that change is a necessary component of life. It's difficult to say more without plunging into spoiler terrain, but it's worth pointing out that Kirk could have been directing his remark to the Star Trek faithful. Expect a few changes.

The biggest change in Star Trek Beyond involves the person at the helm. Justin Lin takes over from J.J. Abrams, who remains as a producer. It should surprise no one that Lin, best known for Fast & Furious movies, gravitates toward action. He loads (perhaps even overloads) Beyond with noise, flying debris, and over-edited battle sequences.

At the same time, Lin makes sure that the characters are well-served. Kirk (Chris Pine) begins the movie with a case of space fatigue. He's not sure he wants to continue as Captain of the Enterprise.

Spock (Zachary Quinto) also contemplates a life change. As a result, his relationship with Lieutenant Uhura (Zoe Saldana) has hit a snag.

The rest of the crew remains reliably familiar: Sulu (John Cho), Chekov (Anton Yelchin) and Scotty (Simon Pegg) all do their part.

You've probably read that this episode reveals that Sulu is gay with a husband and child, information Lin presents in an off-handed way that suggests we're in a version of the future in which sexual orientation has ceased being a talking point.

Lin wisely includes references to the original Mr. Spock, perhaps to acknowledge the actor who played him. Leonard Nimoy died last year.Star Trek Beyond, by the way, is dedicated to both Nimoy and Yelchin, who was killed in a freak auto accident earlier this year.

New additions also can be found. Besides the reptilian-looking Krall (Idris Elba) -- the villain of the piece -- we meet Jaylah (Sofia Boutella). She's an alien woman who joins the Star Trek team in its effort to prevent the destruction of Yorktown, a massive Federation space station that Lin explores with swooping, dizzying camera moves.

The screenplay by Pegg and Doug Jung seems based on something we might call "the speed principle." Move quickly and few will notice plot holes or fret about the fact that a rescue oriented story wears a bit thin.

But sci-fi precision never has never been Star Trek's strong suit. Ethical questions usually take precedence. Although such questions are raised, they now seem to peek out from behind the movie's many action set pieces.

Put another way, Beyond isn't the most contemplative version of Star Trek, although it has its compensations: A couple of moments involving old-fashioned rock music should bring a smile to most faces.

At a Wednesday night showing -- the movie began at 10 p.m. -- the crowd seemed especially to enjoy the interchanges between Spock and Bones (a scene-stealing Karl Urban). Such scenes wisely reiterate or poke fun at the recognizable traits that define Star Trek characters: Spock's deadpan commitment to logic or Bones' sniping humor, for example.

So back to the beginning. This edition attempts to reprise what's familiar about the series while also giving it new energy. Change, but not so much that we forget that we're watching a Star Trek movie.

I'm not a fanboy, so I don't know how Star Trek stalwarts will receive this new edition. In my estimation, Beyond whizzes by without damaging the franchise, while also providing a couple of inspired bits and firing retro rockets of nostalgia in ways that feel like true expressions of affection.

Lin even finds a way to work a motorcycle into the story, but don't fret Star Trek purists: Lin hasn't propelled Fast & Furious's Vin Diesel into the final frontier. Some things remain sacred.


Posted by Robert Denerstein at 4:35 PM