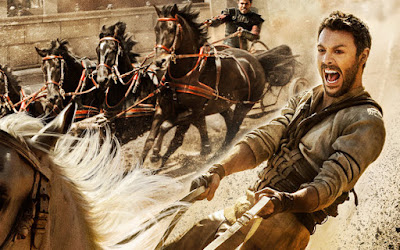 When a happy-go-lucky Jewish kid from a well-to-do family gets crosswise with the authorities, his life turns upside down.

No, not another Philip Roth novel. I'm talking the first century A.D., and that young man is none other than Judah Ben-Hur, the hero of an 1880 Lew Wallace novel that has spawned a variety of Hollywood movies. William Wyler's 1959 version remains the most notable big-screen effort, starring Charlton Heston as a revenge-seeking Judean who discovers forgiveness when he realizes, through exposure to Jesus, that there's more to life than getting even.

In what may have been an effort to relate to contemporary audiences, a screenplay by Keith R. Clarke and John Ridley on occasion displays a tendency to blur the line between the language of 33 AD and 2016.

During the fabled chariot race, Ben-Hur tries to defeat Messala, a man who was taken in by Judah's family, but who grew up to become a powerful Roman centurion.

Sheik Illderim (Morgan Freeman in dreads) watches the race from the sidelines.

Freeman, by the way, is the most recognizable name in a cast of largely unknown actors who probably haven't helped themselves make it to the A-list with what amounts to a drab sword-and-sandals march through the dawn of Christianity and Roman oppression of Judea.

Jack Huston and Toby Kebbell play the main roles in this Ben-Hur. Huston, who appeared behind a mask that covered half his face in HBO's Boardwalk Empire, is more fully exposed here as Judah Ben-Hur. Huston tries to create a Judah of life-sized proportions.

After the granitic renderings of Heston, it's an understandable choice, but one that reduces Judah's stature in epic-shrinking ways.

Kebbell, in the role played by Stephen Boyd in the 1959 version, doesn't fare much better as Messala.

This time, we see more of Jesus, who is played by Rodrigo Santoro. Given the recent spate of faith-based movies, I wondered whether an enlarged role for Jesus represented an attempt on the part of the filmmakers to appeal to that part of the audience that seeks out Christian-oriented entertainment.

But in this outing, Jesus' words serve mostly to italicize the meaning of the entire enterprise, which can be reduced to a single word, "forgive."

Judah, of course, has a long list of affronts that require forgiveness. His mother and sister were taken by the Romans. He was separated from his loving wife Esther. He spent five years as a galley slave, pulling on oars while a Roman behemoth pounded relentlessly on a drum.

In short, he was unjustly stripped of his aristocratic privileges and made to suffer.

Now, as for the great chariot race, the piece de resistance of any Ben-Hur movie ...

I saw Ben-Hur in 3D, which didn't make the race any more exciting than the one that Wyler served up more than 50 years ago, a more or less severe indictment in the age of CGI. Besides, Wyler's version boasted considerably more pomp.

Bekmambetov's fervid approach to editing is far too choppy for my tastes, and even the movie's pleasures of scale aren't first rate: the great stadium carved out of rock in which Pontius Pilate (Pilou Asbaek) stages chariot races and a sea battle in which vessels ram each other with harrowing force, for example.

In all, Ben-Hur is an uninspired work that appears toward the end of an already disappointing summer. Worse yet, it's a movie that demonstrates how far we've come from the days when movies could become events that tended to dominate the cultural conversation.

Ben-Hur may not become a legendary box office failure, but as an aspiring epic it feels like ... well ... just another movie -- and not a very good one, at that.