Japan's Our Little Sister is a quiet gem. 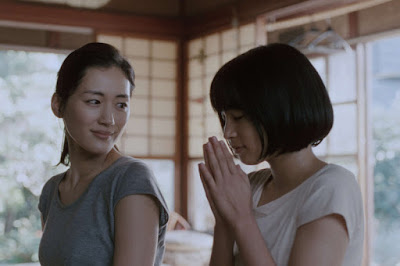 Many of the life-changing events that determine the shape of the Japanese movie Our Little Sister take place before the movie begins, shattering personal developments that the characters already seem too have incorporated into their very beings.

Those with a taste for deliberately paced cinema with a deep humanistic streak will find ample pleasures in director Hirokazu Kore-eda's latest, the story of three grown sisters who attend their father's funeral and learn they have a 14-year-old half sister. The three women hadn't seen their father for 15 years.

As the story unfolds, we come to understand that the three sisters grew up on their own. Their late father fell for another woman and moved to another city. Overwhelmed by her husband's departure and daunted by the task of raising three children, Mom took off, as well.

As it turns out, the three sisters have settled into a routine. Haruka Ayase plays Sachi, the oldest and take-charge sister. Masami Nagasawa portrays the second oldest sister, a woman who works in a bank and seems to have questionable taste in men. Kaho, an actress and model, plays the youngest and most free-spirited sister.

Once Dad's funeral concludes, Sachi invites half-sister Suzu -- who faces life with a step-mother she can't stand -- to live with the sisters. Suzu's mother evidently passed away, leaving Dad to marry for a third time.

Suzu quickly adjusts to life in a new city, the coastal town of Kamakura. She makes friends and continues to develop bonds of affection with the sisters who clearly provide her with an emotionally supportive environment she very much needs.

Kore-eda (Like Father Like Son) makes it clear that young Suzu is learning how to be a woman from her three sisters, who also manage to charm an audience as much as the cherry blossoms that become the movie's symbol of renewed life and fleeting beauty.

A relationship between Sachi, the responsible older sister, and a married pediatric surgeon brings the movie close to a melodramatic plot twist, but Kore-eda remains far more interested in the rhythms of ordinary life than in romantic developments.

So when the characters gather for a meal at the local diner, run by an old and reliable friend, we're happy to be there with them. We're reassured when they carry on the family tradition of making plum wine.

Our Little Sister is like a reflecting pool: The surface may be calm, but emotions ripple deep beneath its surface and can be savored long after this lifelike portrait reaches its satisfying conclusion.

You'll have to make up your own mind about Yoko Kanno's lush score. I remain undecided about it, but I'd still insist that Our Little Sister feels as effortless as a summer breeze and should provide just as much relief for cinema-parched audiences. We should be grateful.