Selling arms for fun and profit

Miles Teller and Jonah Hill team for a comic thriller about gun runners. 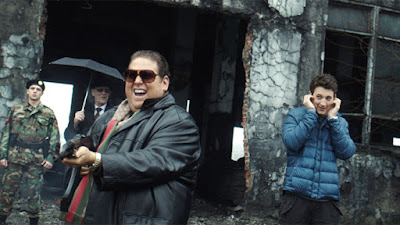 It's impossible to watch War Dogs without thinking about such recent movies as The Big Short, American Hustle and maybe even Wolf of Wall Street. Director Todd Phillips (The Hangover Trilogy) has made a movie about a couple of buddies who wind up trying to outsmart the US government with a $300 million arms contract that involves faulty and illegally shipped bullets.

Making a movie about amoral characters isn't easy, even when that movie has an infectiously jaunty spirit. Because we spend a lot of time with the buddies played by Miles Teller and Jonah Hill, War Dogs puts us in the awkward position of rooting for a couple of gun runners without asking that we give much thought to the ramifications of their business.

Hill plays Efraim Diveroli as an overweight hustler without qualms. Teller portrays David Packouz as a person who hasn't entirely lost his moral compass, but the movie is best as a conventional bromance that deals in stark incongruities: A couple of ill-prepared novices trying to cross Iraq's "triangle of death" with a shipment of Berettas and a guide named Marlboro, for example.

The partners' trip to Iraq qualifies as an exception to their standard business practice, which involves reaping as much profit from war as possible without leaving their Miami offices. The idea is to make money without getting shot at.

As explained in the movie, Diveroli understood that serious money could be made by bottom feeding; i.e., landing the small contracts that the big arms dealers ignored. Lots of small contracts added up to big money.

A lot of what the two men did was perfectly legal -- until it wasn't.

Hill -- not exactly a physical specimen to begin with -- has put on weight as if to demonstrate that Diveroli is encased in his own gluttony. He loves money, cocaine and prostitutes. Hill gives good sleaze, complete with slicked back hair and a high-pitched, near maniacal laugh. A poster of Al Pacino as Scarface hangs above Diveroli's desk.

As the more conventional of the two, Teller's David has a wife (Ana de Armas) and small daughter. Initially, David hides his business from his wife, who thinks that he's selling high-quality sheets to Florida homes for the retired. David did try his hand at that business until Diveroli invited him to join his lucrative venture.

Diveroli's arms operation -- his company is called AEY -- is financed by a dry cleaner and Orthodox Jew played by Kevin Pollack. Pollack's character believes -- or wants to believe -- that he's investing in a business that supplies arms to Israel.

Following a well-worn path, Phillips shows the exhilarating kick of making large amounts of money. The partners move up in the world, buying fancy Miami apartments and indulging in ample amounts of high living.

Credited to three writers including Phillips, the screenplay focuses mostly on Teller's David, a man who starts the movie as a masseuse. David's early picture financial failures make him vulnerable to Efraim's advances.

The two men knew each other as kids, and were best friends at the local Yeshiva. David also serves as the movie's narrator, our guide through this tainted world.

You probably know from previews of coming attractions that War Dogs makes room for Bradley Cooper. Cooper plays Henry Girard, a shady arms dealer whose name appears on the terrorist watch list. After what appears to be a chance meeting in Vegas, Gerard offers to sell Efraim and David 100 million rounds of bullets for AK-47s, allowing them to bid on a contract that would result in their biggest score ever.

It's a bit late in the review to mention it, but War Dogs is based on a true story that derives from a 2011 Rolling Stone article by Guy Lawson, who wrote also tackled the subject in a book, Arms and the Dudes.

Despite his penchant for gross-out comedies, Phillips has directorial chops, and he uses them effectively in scenes set in Jordan, Iraq, Albania, Las Vegas, and Miami. Phillips proves capable of handling the globe hopping this kind of comic thriller requires.

What's missing from War Dogs, which can be entertaining, is a real sense of an arms trade that inflicts considerable harm on large numbers of people. It's a war movie without casualties.

Phillips may be too addicted to fun to go all the way to seriousness. For all of War Dogs' antic energy, I couldn't help wishing Phillips had taken a bigger step in that direction.