This hunk of adult animation earns its R rating. 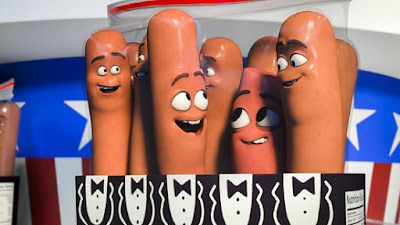 When I tell you that the animated movie, Sausage Party, involves walking, talking hot dogs and buns, you don't have to work too hard to surmise that the humor will be sexual and that it won't be subtle.

That's not to say that the splashy, adults-only animation in Sausage Party is not without trace elements of wit or that some of the jokes aren't funny, providing you're not put off by a slew of "F" and "MF" bombs that are thrown around so casually, they seem like accepted parts of speech.

And when I tell you that the villain in this ribald piece is a character named Douche (Nick Kroll), you should have all the information you need to know that Sausage Party is brash, impolite and damn proud of it.

Brimming with ethnic stereotyping and building toward an orgiastic finale that would be rated NC-17 if it didn't involve grocery store perishables, Sausage Party tells the story of hot dog Frank (voice by Seth Rogen). Frank falls for a bun named Brenda (Kristin Wiig). Frank and Brenda lust for one another, but can't do anything about their desires until they're liberated from their respective packaging.

The movie's characters give you some idea of what directors Greg Tiernan and Conrad Vernon have in mind.

In addition to Frank and Brenda, we meet Sammy (Ed Norton), a bagel who sounds very much like Woody Allen, and Lavas (David Krumholtz), an Arab hunk of pita who believes that eventually he'll be rewarded with 77 drips of extra virgin olive oil. I didn't even mention Teresa (Salma Hayek), a taco shell and Latin bombshell with lesbian leanings.

Sexual preferences aside, Sausage Party also immerses us in a story about the way faith functions to keep folks under control. The perishables at Shopwell, the supermarket where the story takes place, believe that when they're purchased they'll find eternal bliss in what they call "The Great Beyond." After being wheeled out of the store in shopping carts they'll be eternally happy.

Not so fast, says Honey Mustard (Danny McBride), a return item who has seen The Great Beyond, and knows that his perishable brothers and sisters will be sliced, diced, boiled, fried and otherwise "murdered" by hungry humans.

We follow some of the characters into The Great Beyond, notably little Barry (Michael Cera), a hot dog who hasn't grow to full size and who learns the horrible truth: The faith on which Shopwell runs is hokum.

Perhaps in a spirit of fairness, the screenplay also includes some non-perishable items, most prominently Firewater (Bill Hader), a native American bottle of liquor whose wisdom seems to derive from massive inhalations of marijuana.

Come on, you thought you'd make it through this kind of movie without a pot joke?

I don't know what it says about me, but I laughed at the wad of gum (Scott Underwood) that rides around in a wheel chair and talks in a voice that resembles the electronically produced voice of physicist Steven Hawking. Gum, we learn, became smart because he spent years stuck under the desk of a brilliant scientist.

Too much? Probably, but Sausage Party thrives on tossing out too much of everything.

In the right crowd, Sausage Party might be fun. It may not run out of energy, but it does sometimes run out of comic gas, and it's not always fall down funny.

Hey, Bobby, I'm glad you found some merit in this flick. Otherwise all my laughing would've been for naught. :-)