At the bedside of a dying king 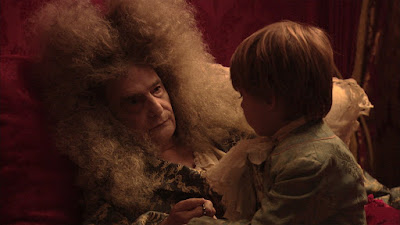 It's difficult to explain why watching someone on their deathbed creates a certain grim fascination. Are we compelled to ask what it will be like to find ourselves in such a position -- which we someday surely will?

Perhaps, but it's nearly inconceivable to think that a director would make a one-hour and 55-minute movie about a bed-ridden man who's on the verge of expiring -- even if that man is Louis XIV, the great Sun King of France and the longest reigning monarch in the country's history. Louis died in 1715 after 72 years on his gilded throne.

Catalan director Albert Serra takes on the challenge of creating a movie about a dying man, embracing nearly every hazard such a task entails. He uses no flashbacks and does little to flesh out Louis' career. He surrounds Louis with courtiers and physicians who plead with him to eat and who execute the few orders he manages to give. Any sign of life from the dying monarch -- even nibbling a biscuit -- becomes a cause for hope and elation.

Louis is played by Jean-Pierre Leaud, whose long history in French cinema began when he played young Antoine Doinel in Francois Truffaut's landmark 1959 film, The 400 Blows.

Now, 72, Leaud takes on the appearance of a magnificent ruin as Louis lies in his bed at Versailles. Although much of his time on screen is spent in the prone position, Leaud conveys the manner of a man who has known little other than the royal life. Whether he's chatting about the looks of women in the court or descending into the abyss that awaits, Louis remains the king.

True to the movie's mood, Serra includes Louis' final request: He wanted his heart to be cut out and mummified, a command that seems to emphasize the king's assurance of his place in history.

Ultimately, Louis seems more accepting of his fate than the gaggle of advisors who surround him, characters who understand that the center of their world is on the verge of vanishing. They try to force Louis to drink, but drops of water only dribble down the great man's chin. Louis' doctors debate about whether they erred in not amputating Louis' gangrenous leg.

Serra surely will tax some viewers' patience. Slowly paced and composed of minor inflections leading up to the monarch's death, Louis XIV gives us few insights into the events of the period, which probably won't bother those who have forgotten that among Louis' signature accomplishments was revocation of the Edict of Nantes, which had granted rights to France's Protestants.

Historians quibble about why Louis was called the Sun King, but everyone acknowledges that Louis ruled by what he deemed divine right, an imperative that gave him absolute authority. Serra's movie doesn't exactly keep us on the edge of our seats, but few -- if any -- filmmakers would have thought to focus on the final hours of the Sun King and the dying of what had been his magnificent light. Whatever the movie's challenges for viewers, I'm grateful that Serra made it.

Posted by Robert Denerstein at 10:00 AM