Those guardians of the galaxy return

Guardians of the Galaxy Vol. 2 boasts both lulls and amusements, but does nothing to tarnish the franchise. 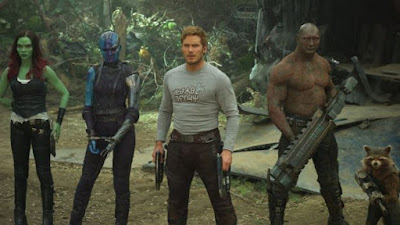 The original Guardians of the Galaxy took the market by storm in 2014, providing a refreshing antidote to the self-seriousness that infiltrates many parts of Marvel's vast comic-book repertoire. Unexpected and slightly bizarre, the movie featured Rocket Raccoon (voice by Bradley Cooper), a snarky animal who delivered the movie's best wisecracks, and a diminutive creature named Groot (voice by Vin Diesel), a mini-tree of an alien who added an element of off-kilter cuteness.

Now comes Guardians of the Galaxy Vol. 2 sporting a name that makes the movie sound as if it aspires to find a home in The Library of Congress catalog. Not Guardians 2 or even Part II, but "Volume 2."

This is not to say that the movie, written and directed by a returning James Gunn, mires itself in big themes. Gunn tries to replicate the self-aware attitude of the first installment, something along the lines of recognition that joyfully teeters on the rim of the pop-cultural toilet without falling in.

If that's too abstract for you, let me put it another way: The first movie was fun. The second movie? Sometimes it's fun.

A creative application of special effects and CGI help keep Vol. 2 from tarnishing the franchise, even as it falls prey to a typical second-helping problem, overcrowding in just about every department.

Vol. 2 plunges viewers into a self-referential universe that makes room for musical and TV nostalgia from the 1980s, one of the fascinations of a Guardian played by Chris Pratt; i.e., Quill. The movie's 1980s nostalgia trip also includes a recurring reference to David Hasselhoff of TV's Knight Rider and Baywatch fame.

I'm always amazed at the pop-cultural knowledge that aficionados bring to these movies. Without prompting, they can tell you all about Drax (Dave Bautista), the muscular man with the hearty laugh that always sounds forced to me, like he has to think about it before letting loose with a guffaw.

During this episode, Quill meets a character who claims to be his father. He's Ego, played by Kurt Russell. If you had any doubts, Ego's name serves as a clue about the character's intentions. Ego wants to enlist Quill's help in fulfilling a long-standing ambition. Trouble, of course, looms.

In what amounts to a glut of characters, Michael Rooker stands out as Yondo, the alien who raised Quill.

You'll also find a cameo appearance by Sylvester Stallone, and we meet Mantis (Pom Klementieff), a creature with an antenna that enables her to function as an empath. Mantis touches people and instantly knows what they're feeling.

Zoe Saldana returns as Gamora, who this time faces off against Nebula (Karen Gillan), a cyborg with blue skin who began her life as Gamora's sister. Hey, a little sibling rivalry never hurts.

One of the movie's better bits involves a character named Taserface (Chris Sullivan), a brutish fellow whose descriptive but preposterous name prevents his victims from taking him seriously. If you're keeping score, Taserface belongs to a group called the Ravagers.

Gunn provides enough explosions to satisfy action-hungry audiences, and after a third-act dip, the movie picks up for an ending that tempers the obligatory mayhem with a bit of emotion that stems from the self-sacrificing act of one of the movie's characters.

You may be getting the impression that the movie virtually bursts with characters, effects, action and amusements. Some hit; some don't. But Vol. 2's mixed bag won't keep it from reaping a box-office bonanza. I can't say that Vol. 2 matches the enjoyment of the first movie, but, boy, can you see it trying.