Food and diversity in Israel

A restaurateur wants to know if there's such a thing as Israeli cuisine. 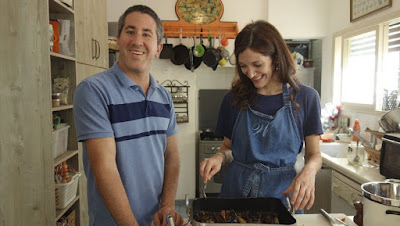 After watching Jeremiah Tower: The Last Magnificent, the story of one of the first celebrity chefs, I realized that I'm getting sated with Foodie World's endless fascination with trendy restaurants, star chefs, and the latest eating fads. I say this as someone who loves good restaurants and who would rather order from a menu than turn any dial on my kitchen stove.

But watching food being eaten is not the same as eating it oneself, and so it was with a bit of trepidation that I turned to director Roger Sherman's In Search of Israeli Cuisine, a documentary about the maturation of food culture during the last several decades in Israel.

To make his film, Sherman follows the travels of restaurateur Michael Solomonov, who was born in Israel and now operates Zahav, a Philadelphia restaurant devoted to modern Israeli cuisine. Solomonov's mission: To discover whether a country as young as Israel has developed a bona fide cuisine.

Right off you should know that the movie reaches no hard conclusions about the question it raises, but the lack of one conclusion leads Solomonov to many others.

The movie takes us on an unusual tour of Israel, one that's not organized around politics or biblical sites. Instead, we meet ordinary people and food professionals who live and work in a country that is more of an ethnic hodgepodge than you might expect. Influences on Israeli food come from Arab cultures, Eastern Europe, and the Mediterranean, as well as from more personal authorities, a mother's or grandmother's kitchen.

Although the film seems to want us to believe that food might be able to pave a pathway to peace, it acknowledges simmering resentments; some Arabs express anger about what they view as Israeli appropriation of their cuisine.

Sherman isn't terribly concerned about religion, although the subject does arise. One of Sherman's interviewees describes Shabbat (the Sabbath) in Jerusalem as oppressive. Nothing is open. Most of the film's chefs are more identified with the secular culture of Tel Aviv, a city that bustles with street life and interesting dining opportunities.

It's especially revealing to know that a country not much larger than New Jersey has its own regional diversity -- from coastal areas to the mountains to a seaside village north of Haifa where a local chef extols the virtues of shrimp, not an item found on menus in Jerusalem's kosher eateries.

And although I said that the movie isn't interested in hammering any political nails, it should be noted that the weight conflict proves inescapable. We learn that Solomonov's brother was killed while serving in the Israeli army.

I suppose the best way to sum up this lively documentary is to say that it introduces viewers to a side of Israel that gets little play in headlines from the Middle East.

I've never been to Israel. From time to time, I think about making such a trip. Until this documentary, it never occurred to me that such a journey might include significant amounts of time visiting great restaurants.