Director Ben Young has skills, but has he applied them to the right subject? 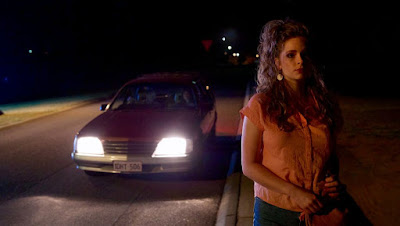 Generally speaking, criticism has more to do with "how" than with "what;" i.e., subject matter often proves less relevant to reviewers than the effectiveness with which that subject is handled. Sometimes, though, subject matter becomes an unavoidable part of formulating an informed opinion.

I thought about this while watching Hounds of Love, an Australian thriller in which a normal-looking couple from Perth abducts and kills young women. Set during the 1980s, the movie has been praised for director Ben Young's discretion. For the most part, Young keeps the movie's torture and violence off screen.

Fair enough, but directorial restraint doesn't mean that the crimes of fictional couple John and Evelyn White aren't felt. At several points, I found myself asking why I was watching. Was there anything to be gained from a such an uncomfortable experience, no matter how well executed by a director who's mounting his first feature?

For me, there were gains, but I'd have to classify them as secondary to my overall concern.

For example, I'd cite the performance of Emma Booth, the actress who plays Evelyn White. Booth's Evelyn wriggles under the thumb of John (Stephen Curry), her control freak of a husband. At times, she feels sympathy for the couple's victims, and for her, abduction of young women can have a double edge, particularly if John is sexually attracted to one of their victims.

The movie, also written by Young, centers on a familiar question. Can the victim, a teen-ager played by Ashleigh Cummings, create enough tension between husband and wife to survive her ordeal?

Cummings' Viki, a 17-year-old whose parents are in the midst of a divorce, defies her mother (Susie Porter) by sneaking out of the house at night to attend a party. The Whites, who are on the prowl, pass by Viki in their car and offer a ride. They seem nice enough, but it's already clear that Viki will be in for a rough ride. She'll end up drugged and bound to a bed, abused and terrorized by these two apparently friendly suburbanites.

It quickly becomes apparent that a mixture of torture and terror fuels the eroticism between Evelyn and John. They're sexually excited by their foul deeds.

Those who see the movie needn't know much more, although it should be noted that Young amps up tension without too much fuss as he allows his imagination to wander from his apparent inspiration: the real-life story of David and Catherine Birnie, a Perth couple who kidnapped and mutilated four young women during the 1980s.

Young begins by allowing his camera voyeuristically to scan the bodies of young women playing ball in a schoolyard. It's only later that we realize we're being exposed to the killers' point-of-view, but these opening images make it clear that Young aims to undermine any sense of ease viewers may feel.

By the end, Hounds of Love has taken on the trappings of a conventional thriller, but I found myself still struggling with the question that bothered me throughout. I guess I wish that Young, who clearly has skills, had tried his hand at something more thematically rewarding than a teen-ager's torment at the hands of a murderous pervert and his cowed partner.