Not for the squeamish, but Villain hits many of the right notes. 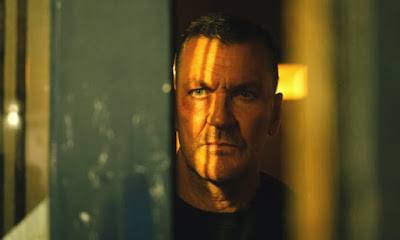 The opening of Villain, the latest addition to the densely populated British gangster genre, clearly establishes the tension that will drive the movie.

Even before the credits roll, a whimpering thug is dragged from the trunk of a car, humiliated and almost killed by a couple of hard guys to whom he owes a considerable amount of money. This bit of brutality is followed by views of a convict being released from a 10-year-stretch in the slammer. We'll soon learn that the two men -- the victimized thug and the former prisoner -- are brothers and that one will drag the other down.

Craig Fairbrass, an actor whose face looks as if might have been carved from granite with a chipping hammer, portrays ex-con Eddie Franks. Fairbrass creates a character of appropriately mixed attributes. A stand-up guy, Eddie's loyal to his profligate brother (George Russo), a junkie who has gotten himself in debt to a menacing loan shark (a terrific Robert Glenister).

Eddie’s word may be good, but he makes no bones about the brutality that has kept him alive since he was a kid.

Villain makes little effort to break its genre mold, but it updates the ethnicity of its characters to include a bit of multi-racial mixing. Eddie, for example, fathered a biracial child (Izuka Hoyle) who’s now grown but who can't resolve her anger toward a father who has played little role in her life.

The movie's depth stems from Eddie's fractured personality. He's trying to straighten out the mess his heroin-addicted brother has made of a pub the two own. Eddie even performs a Gordon Ramsey-style makeover on the place. But we never really believe Eddie will transcend his doom-struck fate.

If you're squeamish about movie violence, you may want to take a pass on Villain, which includes vicious beatings with a hammer, knifings and a murder that leads to a body-disposal sequence that makes one the characters vomit and could have a similar effect on viewers who are unaccustomed to the genre's down-and-dirtiest maneuvers.

Add a drug-addicted stripper (Eloise Lovell Anderson) and you've pretty much got the gist -- except that Villain does a decent job of turning Eddie into a tragic figure. A man who tarnishes everything he touches, Eddie knows that he won't be able to outrun his destiny. Fairbrass imbues Eddie with grim resignation that he carries with something bordering on acceptance.

I wouldn't call Villain a classic but director Philip Barantini hits most of the right notes, although you may need a machete to cut your way through some very thick accents. Subtitles would have been welcome.