She barges into the world of rock

Beanie Feldstein gives a powerhouse performance in How to Build a Girl. 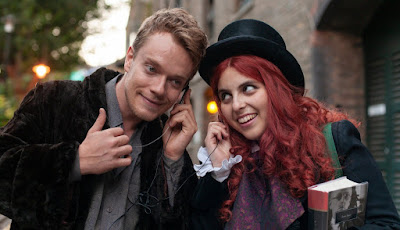 In How to Build a Girl, an adaptation of an quasi-autobiographical novel by Caitlin Moran, director Coky Giedroyc tells a high-spirited story about a nervy girl from Britain's Wolverhampton who crashes her way into a role she's not prepared to fill.

A movie such as How to Build a Girl requires a star who can handle its main character's volatile mix of ambition, insecurity, and smarts. Giedroyc finds one in Beanie Feldstein, an actress who provides the strongest reason to watch a movie that can't quite accommodate all of its tonal shifts -- from exuberant comedy to typical cautionary tale.

In the movie, the Moran character — called Johanna — begins her "career" in the early 1990s as an ungainly 16-year-old who submits a review to a weekly rock magazine. Wildly out of touch with the magazine's vibe, Johanna reviews the soundtrack of Annie. After meeting with a skeptical crew of rock journalists, Johanna barges her way into a tryout for the magazine. Her initial goal is modest: To make enough money to reclaim her family's recently repossessed TV.

The movie remains peppy and engaging as Joanna tries to adapt to her new life. She dons a top hat, fishnet stockings, and applies ample amounts of lipstick. She's reborn -- or at least thinks she is.

Nothing if not lively in her approach, Giedroyc also makes use of fanciful touches: When Johanna talks to the various star photos that adorn her bedroom wall, they talk back to her. Johanna's wide-ranging gallery includes Sylvia Plath, Julie Andrews, Sigmund Freud, and the Bronte Sisters. It's a nice way of showing that Johanna's chaotic consciousness is far from fully developed.

It doesn't take long for Johanna to meet a rocker (Alfie Allen) who sweeps her off her feet — not a difficult task when it comes to a teenager who doesn’t know how to avoid the traps a more seasoned writer would have sidestepped.

But the movie can't sustain its rocket ride forever, Johanna who adopts the pen name Dolly Wilde, eventually begins to founder in a lifestyle in which she can't separate her own notoriety from the musicians about whom she writes. She becomes too self-impressed and never really understands that she’s more of a curiosity than a bona fide critic.

Giedroyc does a nice job with the movie's supporting roles. Sarah Solemani plays Johanna's worn-down mother, a woman who no longer harbors any dreams about her life. Johanna’s good-natured father (Paddy Considine) still thinks he might make it as a jazz musician, a vision in which only he believes.

More fun during Johanna's ascendance than when she reaps the consequences of her sometimes abominable behavior, How to Build a Girl nonetheless gives Feldstein a showcase role as a young woman who doesn't live life but insists on plowing through it.