It feels as if we've already traveled this road..... but how much do we really care? 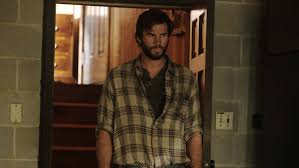 The movie revolves around the drug trade, drips with Arkansas-style colloquialisms, unfolds in clearly marked chapters, and plays around with the sequence of events that drive the story. Sound familiar? If so, it's because we've seen any number of movies that dive into a pool of tricky currents, ripples from a wave that’s broken before. Now that I've sounded a cautionary note, you might want to set it aside because Arkansas, a thriller starring Liam Hemsworth and a strong cast of supporting actors, resembles the way I feel when someone asks me how I'm doing in these days of coronavirus. "Good enough," is my standard reply and it fits director Clark Duke's debut movie. The pleasures of a movie such as Arkansas have little to do with its many plot twists. The fun here involves waiting to see who'll crop up in which role. The list includes John Malkovich as a park ranger mixed up in the drug trade, Michael Kenneth Williams as a dealer operating out of a convenience store, and Vivica A. Fox as a character who goes by the name "Her." She's some sort of a middle-person in the drug-dealing chain the movie rattles. Sitting atop this criminal pyramid, we find a character named Frog (Vince Vaughn in some of the wildest western shirts I've seen in some time). Functioning as a kind of straight man, Hemsworth portrays a shiftless drug dealer who hooks up with an ambitious young man named Swin (played by Duke). Every story needs a love interest, and Arkansas provides one in the presence of Johnna (Eden Brolin), a young woman who takes up with Swin. Swin? Yeah, the movie sometimes strains to be colorful and you may find yourself catching onto Duke’s character-heavy game. I don't mean to suggest that Arkansas should be mistaken for a character study. It's a merry go round that passes by a variety of characters, each a little more offbeat than the last one. Still, the screenplay by Duke and Andrew Boonkrong seldom trips over its own feet as it pirouettes through its abundant idiosyncrasies. "This world we're livin' in. It's morally atrocious," says one of the characters and we wonder whether the writers aren't trying to let us know that they're hip to their own game. But as I said at the outset, Arkansas is good enough for a look with Vaughn scoring as the piece's casually vile villain.