Aliens may loom, but it's the Earth that's weird. 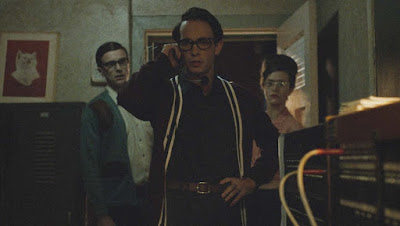 Director Andrew Patterson's nifty first feature is a hoot. Self-consciously packaged as if the movie were a bit of '50s television on the order of The Twilight Zone, The Vast of Night tells the story of two teenagers in Cayuga, New Mexico, kids who clearly aren't caught up in the town's ordinary pursuits.

Patterson opens his movie by moving his camera into the screen of a mid-century style TV for an episode of a show called Paradox Theater, complete with an introduction delivered in Rod Serling-like tones.

Black-and-white fades into color and the main portion of the story unfolds. Early on, we meet the movie's principal characters. Everett (Jake Horowitz) chain-smokes and works as a night-time DJ at a radio station WOTW. High school student Fay (Sierra McCormick) holds a night job as the town's telephone operator. We're in a time when calls were made by picking up the phone and telling the operator what number you wanted to reach.

Set during the night of Cayuga High School's opening basketball game, the story raises its ante when Fay hears a strange sound over her switchboard. She calls pal Everett, who broadcasts the sound on the radio and asks whether anyone knows what it might be.

A caller to the station tells Everett what he thinks the odd noise is about. He's Billy (Bruce Davis), and he slowly describes a secret Air Force experience that sounds very much like a plot hatched to conceal troubling facts from an oblivious public.

By now, you've probably guessed that we're talking UFO's, a suspicion that's confirmed when Everett and Fay visit Blanche (Gail Cronauer), an elderly woman who claims that her son was abducted by aliens.

But the fun of The Vast of Night has little to do with the story and much to do with how it's told. Presumably responding to budgetary constraints, Patterson proves inventive. He sometimes uses prolonged blackouts, dropping them into the movie in ways that unsettle, something on the order of older times when you might have found yourself banging on the side of a recalcitrant TV in hopes of a restart. Patterson also gives Fay an extended set-piece at her switchboard that makes the most out of a high school girl's vivid energy and a cramped setting.

Adding to the enjoyment, Patterson's camera proves amazingly agile when it moves through town.

The journey here is better than the destination but like the mysterious sound from above, Patterson makes a noise that's worth noticing.