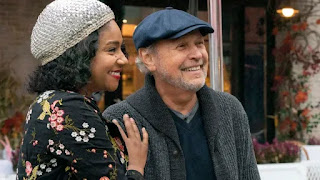 In Here Today, Billy Crystal plays a comedy writer who’s beginning to suffer the effects of dementia. To compensate, Crystal’s Charlie Burnz follows the same route to his office every day, reminding himself what to do at every turn. If he diverges, he's lost.
He’s increasingly forgetful and some of his colleagues on a cable show that resembles Saturday Night Live think he's lost his edge.
Crystal, who also directs and who co-wrote the script with Alan Zweibel, gets to the heart of the story when Charlie meets Emma Payge. (Tiffany Haddish).
Emma's former boyfriend won a lunch with Charlie, one of his idols,  at a charity auction. An angry Emma shows up instead. Before the lunch, she never even heard of Charlie.
During lunch,  Emma has an alarming and not especially funny allergic reaction to a seafood salad and must be rushed to a nearby hospital. Charlie generously pays her medical bills.
No charity case, Emma pays Charlie back in installments, providing an opportunity for the two to become real friends.
Later -- to demonstrate the closeness of their bond -- Charlie and Emma even spoon (their word) a little. Of course, they don't push toward anything more serious than a comforting cuddle. And, no, I can't think of the last time I heard the word "spooning" used by anyone.
It's difficult to imagine that a movie such as Here Today won't step  into puddles of sentiment. It does.
Recurrent flashbacks show Charlie's relationship with his beloved wife (Louisa Krause), who's seen mostly in the prime of her youth.
Like many who face their final days, Charlie wants to make things right with his grown children: a resentful daughter (Laura Benanti) and a son (Penn Badgley) who thinks Dad doesn't value his work as a budding architect.
Broad comedy sometimes swamps sentiment. The movie puts a lot of energy into a scene in which Emma accompanies Charlie to his granddaughter’s bat mitzvah. She commandeers the mic, delivers her version of Janis Joplin's Piece of My Heart, and gets everybody moving on the dance floor.
Scenes at the show where Charlie works made me wonder whether the entire movie shouldn't have taken place in that environment. He may be an ancient in a world full of young comics but Charlie knows that many of them greatly overestimate their talents.
It's nearly impossible to watch Crystal without smiling, which makes the movie’s obvious contrivances feel less brittle. In Haddish, he's found a gutsy actress willing to dive into the movie's more improbable moments without blinking.
Odd-couple sparks aside, Here Today carries the weight of genre  shtick that's older than Crystal and Haddish put together: You’ll laugh.  You’ll cry. That sort of thing.
I did laugh a few times. And I felt Charlie’s pain when he couldn't remember the names of celebrities at a Lincoln Center panel honoring one the films he'd written. Did I cry? Not even close.
In short, my heart was not warmed as surely was intended. Still, I'm happy to report that my fondness for both performers remains undiminished.
Posted by Robert Denerstein at 5:35 PM